A number of you had some very kind things to say about these Rohan chaps that were shown on my painting bench last Saturday, thanks to Sofie’s terrific Saturday Painting Bench project.   I’m happy to say that they were finished on Sunday.  These three fellows are from the Games Workshop Rohan Commanders box set from their Lord of the Rings line.   I’ve been collecting figures from this range since it first came out around 2005 (?), and for a while my teenage son and I played a lot of it.   I loved the look of the Jackson LOTR movies and the way that the Perry brothers brought them to life.   I have a fair number still to paint, and some plans to adapt the Too Fat Lardies Dux Bellorum Dark Ages rules to Middle Earth, but that’s all back burner stuff.  This was just a fun and limited excursion into my stack of unpainted figures. 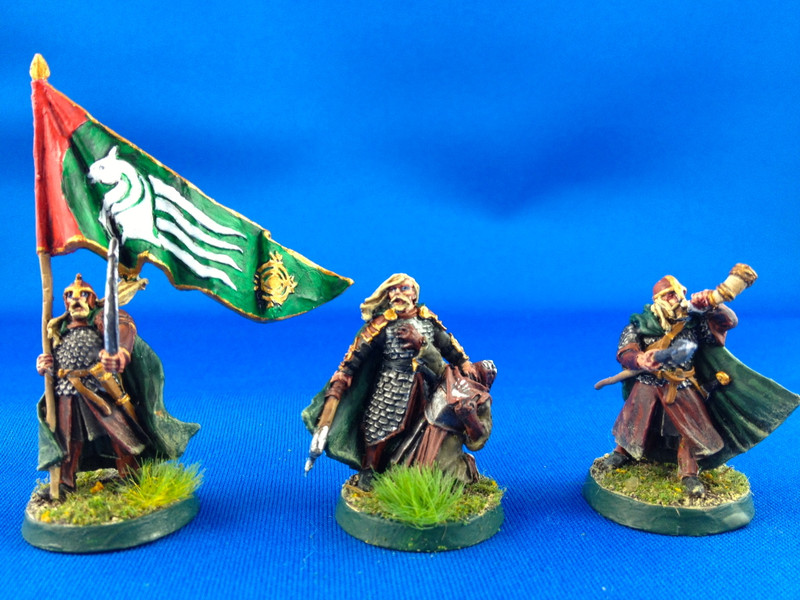 Notice anything strange about the sword that the banner bearer is bearing? I was quite taken by this captain, the bravest and blondest of my figures, seen here as he subdues an underage Uruk Hai who tried to get into Helms Deep with fake ID.   The photo doesn’t quite do justice to the captain’s hair and skin, which I’m rather happy with.  This guy reminds me of Lord Flashhart from the old Blackadder shows. 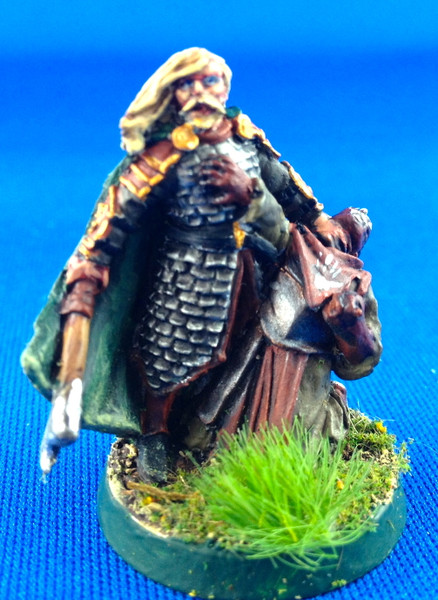 For several recent posts here I used the green backdrop on my light box, but this time I opted for the blue one.  What do you think -  do you like the blue backdrop better than the green one? 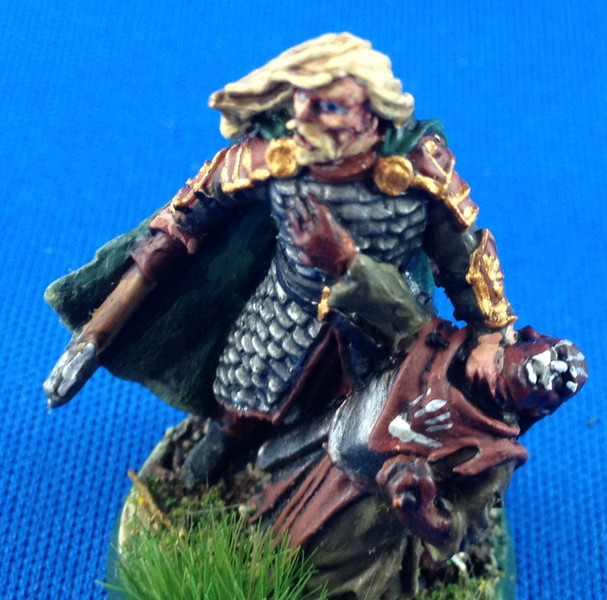 The next few pics are of a GW blister pack, a Rohan outrider mounted and dismounted.  Not really sure what Outriders are.  I gather they are super scouts or something, and since they are metal figures, and pricey, I doubt I will buy any more, though he is a nice augment to the plastic Riders I already have. 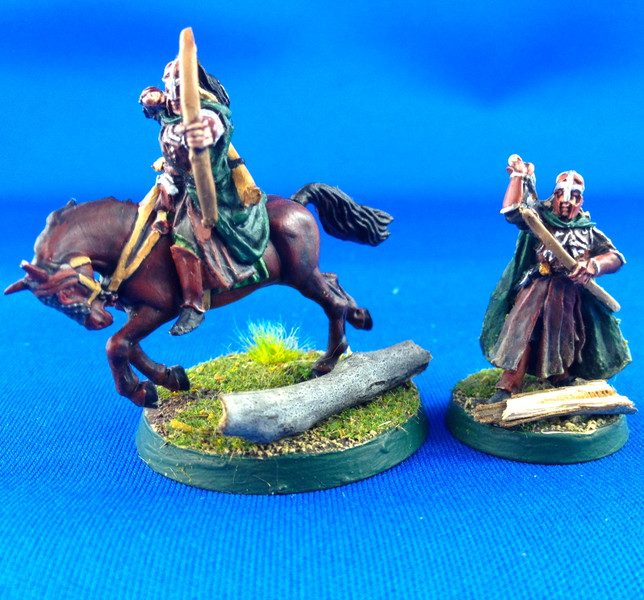 Amazing how useful the odd twig can be when it comes time for basing figures.   I

The green cloak on this and the other Riders uses a base green from a craft store acrylic, Thicket Green by FolkArt.  I have a huge bottle of it, it’s handy for all sorts of uses.   I used a Citadel/GW Thrakka Green (who thinks up these names?) wash and then lighter highlights of the Thicket Green mixed with small amounts of white.  A little bit of dry brushing at the end, using the same yellow ochre I use for the base colour, suggested dust and dirt on the hems of the cloaks. 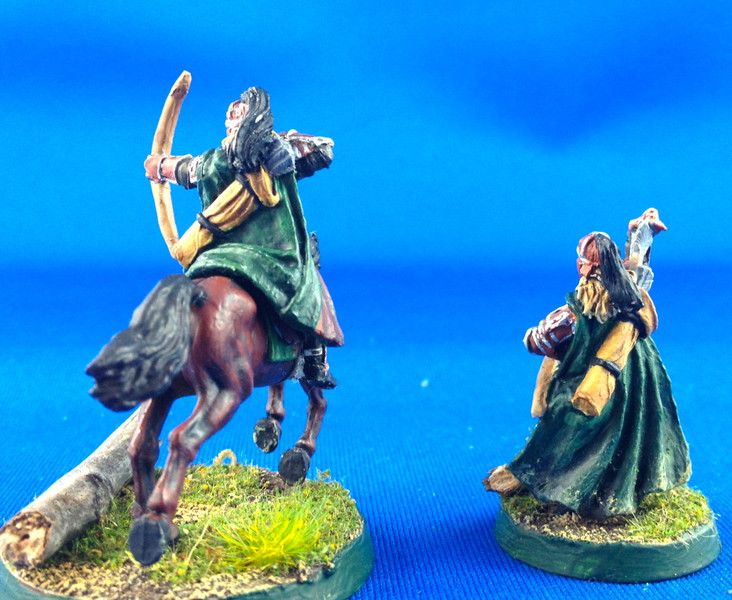 Finally, a single blister figure, a Rohan Royal Guard, a nice bit of heavy cavalry punch. Again, pricey, but one or two more of these fellows for Theoden or my other generals wouldn’t go amiss. 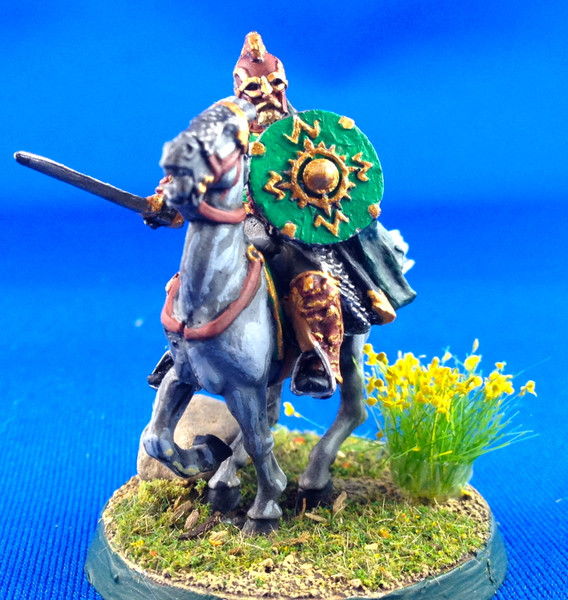 I am a little annoyed at GW that they couldn’t cast a metal horse to go along with a metal rider.  The plastic horses are somewhat fragile, and the weight of the metal mounted figure doesn’t help.  I have a few GW plastic horses where the hoof snapped off from the base, leaving a horse figure that’s rather hard to reattach.  And that’s about all the bad things I’ll say about GW for this post. 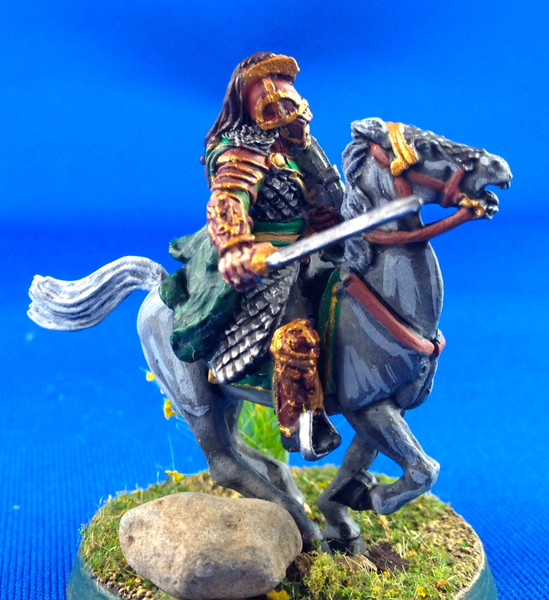 From what I can see of the third party stockists I’ve visited in the past year, they have not been replacing their inventory on the original GW LOTR kit, though I imagine it might still be available at GW stores.  It is still listed on the GW web store, though their Hobbit movie franchise stuff (please don’t get me started) takes pride of place.  So I suspect I still have time to add more figures to my Rohirrim if I want, though there are so many good Dark Ages figures out there, I may augment my Rohan foot and fyrd-type levies with non-GW figures - I think I’m allowed to do that.  I need to look at Gripping Beast for sure.   Any suggestions as to Dark Ages mounted figures that might do as generic Rohirrim?

These figures bring my 2014 totals up to:

Thanks for looking.  Blessings to your dice and brushes,