Last night James (Rabbit Man) Manto and I had another chance to try Too Fat Lardies' Chain of Command, our second time out with these rules.    We chose Scenario 3, Attack and Defend, using James' 15mm collection, Canadians vs German Fallschmirjaeger, and diced to see who got what.   I got the German paras.   We decided not to rate the FJs as Elite, just Regular.   Even so, with their two LMGs per section, each throwing out eight dice, plus one SMG per section for another three dice and one rifleman for one dice, a single intact FJ section with no suppression or casualties can throw out 21 dice per fire combat.    In other words, each section is a bullet buzz saw.   I normally dislike playing with ubertroops, but I have to admit I was glad I wasn't on the receiving end of these guys.

Situation:   A platoon of the Toronto Fusiliers, supported by armour from the Niagara Yeomanry, have been tasked with clearing the village of Benoit des Lapins.   Holding against them, a zug of infantry from 7th Fallschmirjaeger Regiment, with the regimental mortars in support, is tasked with stopping them.   The Canadians are well-trained but new to France, while the German paras are recent recruits from the depots in Germany, so neither side is Elite. And the right hand side of the village from the German side of the table, showing my other two jump off points.  I wasn't happy about how the Patrol Phase played out, in that James managed to grab several JOPs at his edge of the village, which was vexing, seeing as I was supposed to be defending the darn thing.   However, I was happy that my four JOPs formed a line from the orchard on the edge to the hedgerow just behind the orchard on my right, with two close by each other in the rubbled part of the village in the centre.   The orchards could anchor my position if James chose to try a flank attack, while the two in the centre could get my guys into it quickly if James decided to come up the road.

So that left the question of support choices.  James had 14 has his support number, so he could either make lots of small choices or a couple of big choices.  My number was 7, meaning I could either take one big item, like a Panzer IV, or a few smaller items.   Much as I wanted the reassurance of tank, I opted for a FOO with a 8cm mortar battery from Table Four, a Panzerschreck Team from Table 2, and an Entrenchment for the Pzschk team from Table 1.   Together with the Panzerschreck Team I had with the FJ platoon HQ, I was hoping that I would have some AT capability to counter James' support choices, particularly if I could use a Chain of Command dice to drop one of the AT teams onto the table as an ambush against his tank.  That would leave the FOO and mortars to help stop the infantry, even though I had no experience of using indirect fire in CoC.  Well, there's a first time for everything.

Here are the four Allied JOPs.  Which ones would James use?  I would have to wait and see. I shortly have my answer.  A Canadian squad takes up position in the ruined apartment building on my left of the main road.  Both those buildings, by the way, are scratch-built by James and rather fine, I think. And a second section takes up position on the other side of the road, on the left flank of their comrades.   So it's fairly clear now that James is committed to coming up the centre and grabbing as much of the town and its hard cover as possible.

My first deployment choice is fairly simple.  I'm lucky to roll a 4, a 1, and a 2, among other things.   I use the 1 to put the FOO team on my right of the road, in my centre.  With the 2 I put a section with their junior leader on the far side of the road, to protect the FOO and to seize any opportunities to move forward.  I use the 4 to put my platoon sergeant, Unteroffizier Krebbs, beside the FOO, so I can use his leadership to activate the FOO in case I don't roll a "1" in subsequent turns.   As it turned out, he would be my star of the game.  I never had to bring my other senior leader, the Leutnant, on to the table.  I guess he was busy at Cafe Renee a few miles back. Fairly soon it's a firefight.   I use my left most  JOP to bring on my second section in the orchard, with a line of sight to the Canadian section on my left (James' right) side of the road.   The two LMGs of the paras chews up the plaster and brick and send the Canadians ducking for cover.   The Canucks lose two men and take three points of shock - visible below as per James' spiffy new micro dice.   As an aside, I think these truly were micro (as in microscopic) dice. being just slightly bigger than grains of salt. James' lads resolutely fire back, dealing out two casualties to my paras in the orchard.     However, with all four LMGs still in play, the FJs clearly had the upper hand in this exchange. Meanwhile James reveals his first support choice.  A Bren carrier, I think?  That doesn't look too threatening as it slowly chugs its way forward, then stops for a look and possibly a brew  Not too threatening.  Not yett. "Wait a minute, Sarge, my bootlace had come untied!"   James elects to move his section on his left (my right) side of the road forward a tactical bound, but he rolls a "3" for movement, leaving them stranded in the middle of the street, just as a horrible whistling sound is heard. CRUMP!  CRUMP!  CRUMP!  The unfortunate Canucks are caught in the middle of the street, losing men, taking shock, and best of all, from my point of view, pinned.  This was incredibly lucky on my part, because I already had step one, contact with battery, established, but with a moving target in my FOO's line of sight, I didn't' have time to use a spotting round.   I called for fire immediately, and was very fortunate with a minimum deviation of 1" in the direction I needed it to go.   It couldn't have been a better shot had I planned it. Here's a picture showing the scope of the barrage, an 18" square with the aiming point in its centre.   From my point of view, this is perfect.   I've got the two attacking squads pinned, one in the open and the other losing some of its cover advantage because of the indirect fire effect, which means they can't move and their firepower is halved.  As long as I can keep the barrage going, James can't feed any more infantry forward in the centre, and I've got a section in reserve in case he tries to bring his third section up via either flank. Caught by mortars and German LMG fire, James' infantry are getting whittled down.  That other micro-dice by the side of the road is the poor Canadian 2" mortar team that happened to get caught in the barrage. 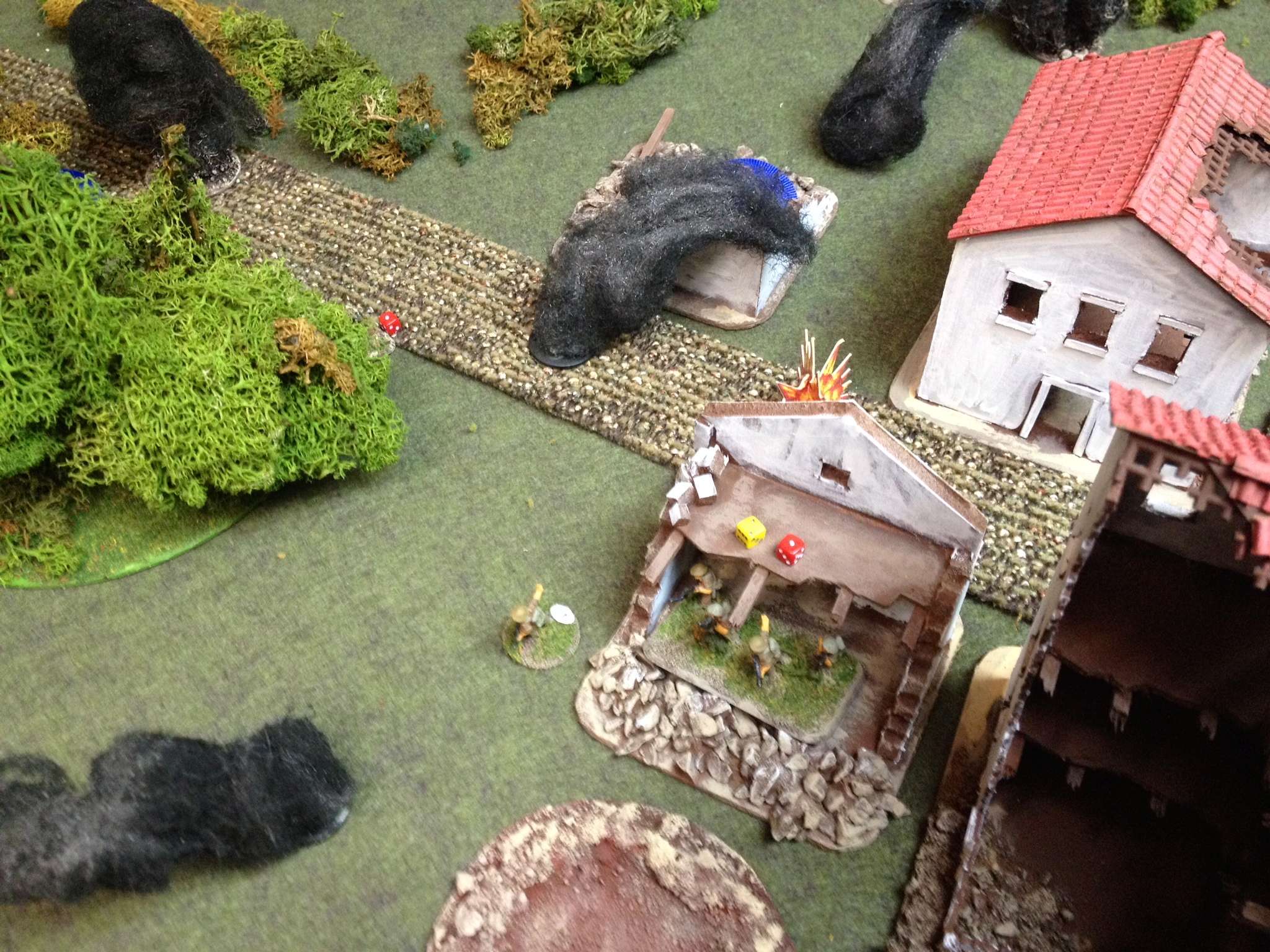 As soon as he acquired one, James wisely used his CoC dice to end the turn and my barrage , but by them one of his sections was wiped out, and the second was at half strength.  Finally unpinned, they holed up in a building. I  decided to advance as the dice allowed it, moving one section out of the orchard. The other section moved up, and entered the building (a lovely 4 Ground model that James had just completed) so we could test the melee rules in CoC.   The melee rules are not dissimilar from previous Lardie WW2 rules.   There was a short,fight in which two German paras were killed, while the remaining three Canadian infantry fell.   The Canadian junior leader was badly wounded, and the platoon sergeant was lightly wounded,.  We allowed the platoon sergeant to win a Military Medal by dragging the wounded corporal out the back door and to safety.

We were now in the Endgame.  James brought his third squad on, also in the centre, since that was the only real route that would do him any good.  I elected to use my CoC dice to try an ambush with one team from my uncommitted section.   They did a little damage, and took some in return. Better for me was that I was able to get my barrage restarted (not a guaranteed thing for subsequent fire missions, I got lucky), and with the threat a little less this time, my FOO could afford a spotting round in order to place it where he wanted it.   If James had any more infantry as a support choice, it would have trouble pushing forward as long as this lasted.  James' morale had crumbled from 11 at the start to just 3, and he was down to three command dice from an initial five, so we agreed that the Canucks had come up short this time.

We managed to get a decisive result in a three hour game, while getting a better feel for using the support tables and for using off board artillery.  There were a few things we did wrong … we were not diligent in checking for leader casualties until half way through the game, which could have changed the outcome somewhat.  Otherwise we felt comfortable with the mechanics.

I was insanely lucky in getting my win.   James had terrible dice getting his support choices onto the table.  I knew that besides the Bren carrier he had a Sherman, but what I didn't know until the end, thankfully, was that his third choice was a Wasp flamethrower carrier.  I would definitely have had the jitters knowing that this fearsome beast was lurking nearby.   In retrospect, James agreed that having a FOO of his own might have been more useful than three AFVs.   Putting the FJ sections under a barrage would have pinned them and halved their shooting dice, taking away some of their insane advantage in firepower.   We also agreed that the Canadian 2" mortar should have been pumping out smoke for all that it was worth.

A great game lovely figures and scenery, and best of all, with a gracious opponent, though there were times when I think James might have tossed me out in the snow - it was bringing the beer that saved me, I think.   I am sure that the next time Rabbit Man and I throw down, the whupping will go the other way.