Waiting for me at the Mad Padre's Painting Chapel when I got home from holidays was a small box full of tiny Frenchmen. As I've said here already, I have this inexplicable impulse to try my hand at Napoleonics, since Conrad Kinch makes the period look like something that any self-respecting gentleman should try. 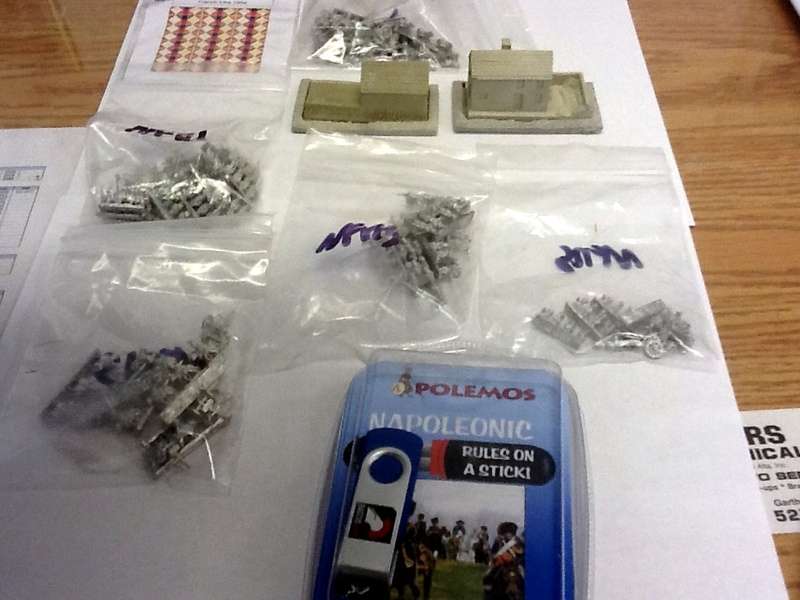 The tiny Frenchmen (do I call them Tadpoles? They seem too small to be Frogs) are from the Baccus 6mm range, which I've heard good things about. After deciding I would do the classic mid period (1806 on) I opted for a bag of line infantry with some voltiguers thrown in for skirmishing, and a battery of guns. Since I've never bought horses, limbers or cassions in a larger scale (hard to justify the expense) I plumped for the full monty - 6mm cassions and limbers can't be too hard to paint up, and don't seem that expensive.

I also tried out a NE European farm/barn set in resin to get a feel for the terrain (at this scale, balsa models don't seem too daunting to make) and since I know little about Napoleonic rules, opted for Baccus' house rules, Polemos, getting their large scale army battles rules (Marechal d'Empire) and their smaller, divisional scale rules (General de Division) on one USB stick.

How to paint them? I've found some helpful stuff on the webI am sure I will come back here to pose questions and ask advice to any Napoleonics folks and/or small scale fans who follow this blog.

I have set myself a goal of getting these little chaps done before Thanksgiving, and then I may try a small order from another manufacturer (Adler? Heroics and Ros?) to see how they compare. But shall I get more Frenchmen or opponents, and if the latter, whom? Russians, British, Austrians, Prussians? Decisions, decisions.