Longtime readers of this blog will be forgiven for forgetting that I am running an American Civil War play be email campaign. It is a fairly slow moving affair, which started last November. When I last told you anything about it, it was back in March of this year and just getting under way. Since I am trying to emphasize the fog of war aspect, I hit on the idea of using newspaper reports to give players and spectators a larger sense of the campaign than what was happening in front of their brigade or command. I decided on a two day time lag between when events appear in the newspapers and the actual game date. So in this post and the next one (which will give the Union point of view), the news is for events on the first day of the campaign, 25 June, when in fact we are just finishing the last turn for 27 June. For those of you who are hearing about this for the first time, an overview of the campaign idea, loosely modelled on the Vicksburg campaign, may be found here. Some info on the USA and CSA commanders is here, and the basic campaign rules are here. You in the back, wake up, there will be a test at the end of this post.

Here once again is the report from the Confederate belle of belles lettres, the lovely Miss Katty O'Kay, written on the eve of battle. 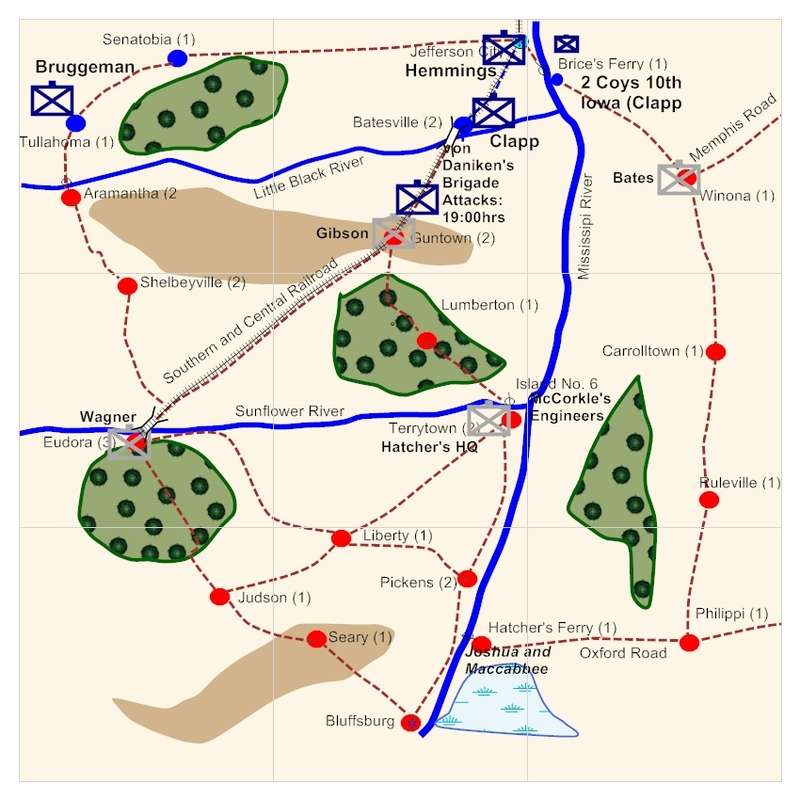 From Terrytown, where General Hatcher has established his headquarters, comes word of the first moves of the Yankee invaders seeking to subjugate our fair city. Having wisely decided that the line of the Little Black River was indefensible, being so close to the invaders' lair in Jefferson City, our gallant general chose to meet the onslaught further south. Late this afternoon, the first blow fell on Colonel Archie Gibson and his "Old Pine Tar" Brigade of Mississipians. The day before, Col. Gibson sent these stirring words to Gen. Hatcher:

"In all that we do over the next few days we will be keeping the population, of this glorious state, free from the calamities of war. My Mississipians are of good heart and spirit; they have been well fed. They are ready for the upcoming conflict and will acquit themselves admirably in denying passage to any Union forces we come into contact with. We will not let down our comrades from Texas, Arkansas, Louisiana and Georgia. We will make our families proud of us. For the Confederacy"

Late in the afternoon, pickets of Gibson's brigade wdrove off Yankee cavalry, but were soon pushed back on their main body as several regiments of Yankee infantry pushed forward. Around 7pm, with less than an hour of daylight, the invaders attacked, supported by artillery. Fire from Johnson's battery tore into the blue ranks, and was continued despite at least one hit on one of our cannon. Pressing forward despite their casualties, the Yankees drove forward on the right wing of Gibson's positions. Their lead regiment charged into the ranks of 30th Mississippi, and after a fierce but brief struggle, our boys prevailed. The Yankees were thrown back in confusion, and their panic infected the two regiments coming up in support, causing them to rout like the craven cowards they are. The 15th Illinois charge into the 30th Mississipi, with support from the 9th Ill. The charge could have gone either way but the Rebs caught the first big break of the campaign. Because the 9th was the same troop quality as the 15th, it also broke when the 15th routed through them. For those curious, I was using Too Fat Lardies' rules, They Couldn't Hit An Elephant. This photo is one of several that I sent to the players. with the battle set up on my wargames table. This battle actually happened last December, giving an idea of how long this is taking. It's a good thing I'm having fun.

Gibson's troops retained possession of the battlefield, and counted over one hundred dead, wounded and captured foemen. Prisoners taken by the 30th are members of the 15th Illinois regiment of Von Daniken's brigade. The name Von Daniken calls to mind the Hessian and German mercenaries of yore which our grandfathers bested in our first revolution. If the Yankee ranks are full of such German hirelings, then victory will soon be ours. Colonel Gibson reports only light casualties and remains determined to guard Guntown from the foe.

Other news reaching Bluffsburg is not as favourable. Reports of Yankee cavalry in Senatobia reached us this afternoon, and it is possible by now that the invaders have reached Tullahoma on the Little Black. We are fortunante that the cavalry of Col. Romney Wagner hold the key bridges at Eudora on the Sunflower River, and will surely check this clear attempt to outflank Col. Gibson. From the east side of the Mississippi, word has arrived that a Yankee force of unknown strength, supported by a gunboat, has seized the little town of Brice's Ferry, across the river from Jefferson City. Several hours before midnight, a courier arrived at Col. Bates' headquarters at Winona with this message.

Readers will recall that Col. Bates commands a strong brigade of mixed troops from Arkansas, Texas, and the bayou state of Louisiana. He is an aggressive fighter and will not take this landing lightly. As we go to press, all in Bluffsburg imagine that Col. Bates is marching on Brices' Ferry with all possible force.

Here in Bluffsburg, we have been watching preparations being made by our gallant sailors. Early this morning, a transport steamed upriver carrying the company of army engineers under Capt. MacCorkle, with rumour that they will be strengthening the defences at Island No. 10. Mechanical problems prevented our mighty ironclad, Joshua, from steaming north, but shortly afteer noon she got under way, accompanied by her lesser consort, Maccabbee. We have no doubt that they will halt any attempts by the Yankees to make the fair Mississippi into a highway for invasion. So, gentle readers, as we go to our beds, we may thank the Almighty that our fair town is defended by such brave men as this, and we pray that with His help they will stand firm and throw back this tide of invasion from the Yankees and their German hirelings.