Back in February I posted here that I had discovered an old Airfix kit that I intended to complete and enter in the Flak Build competition on the Guild Wargamers site. Thomas the Mad Penguin, who follows this blog, also submitted a cracking entry to the Guild Build.

I am happy to report that this: 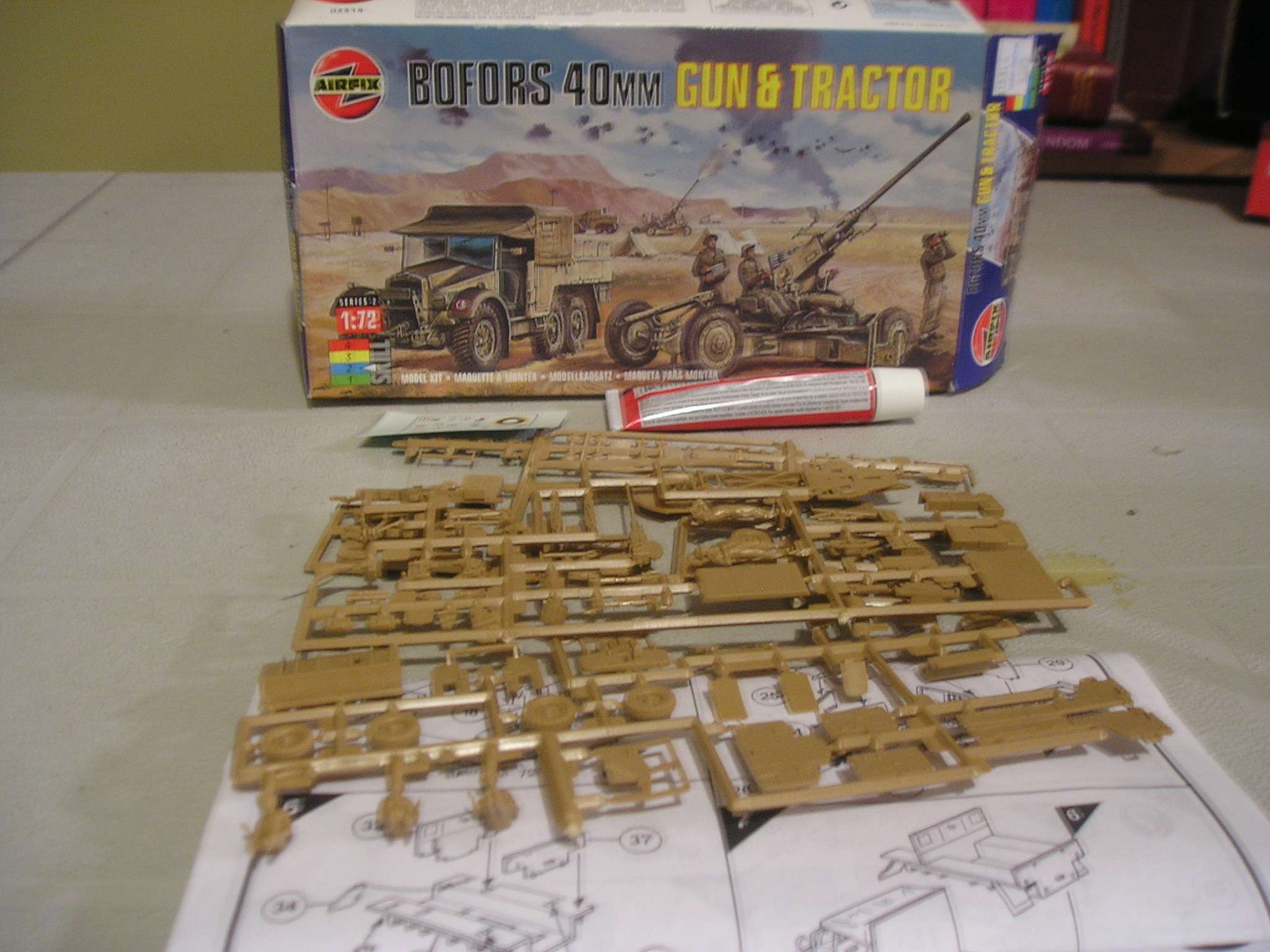 It's been over a year since I tackled a plastic model kit. After reacquainting myself with that particular joy, I can see why people spend good money on resin kits. Not that trying to cut tiny bits of plastic, badly moulded in China, and assembling them with strings of plastic glue going everywhere like Shelob's web isn't brilliant fun, mind you, but it's less and less my cup of tea. 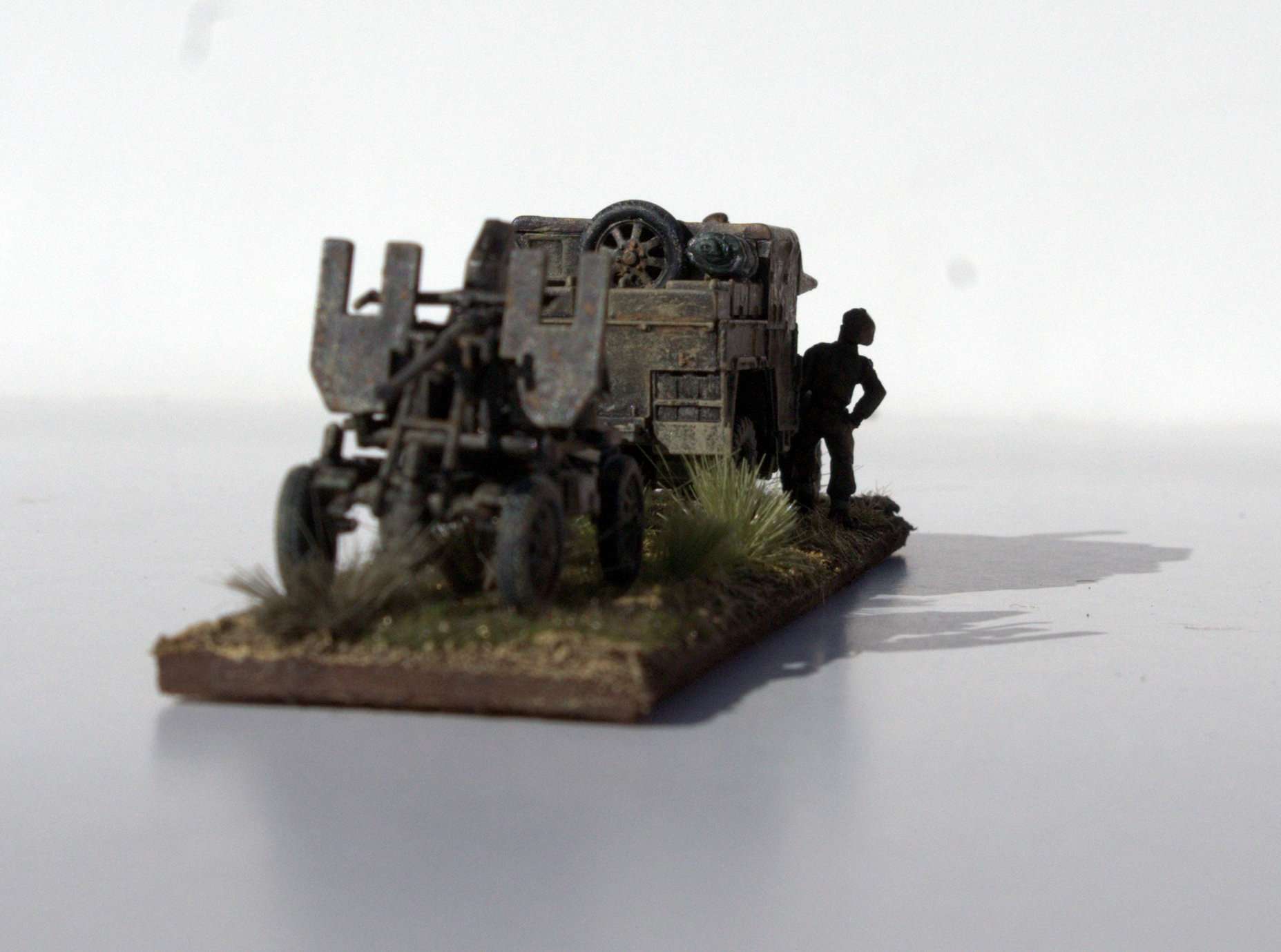 I wasn't intending to assemble the model in the limbered position. I was watching something on telly while cutting and gluing, and that is always dangerous.

I kind of ran amok with the rust, thanks to a Tamiya weathering kit. I've been walking around the base all week, studying rust patterns on vehicles. 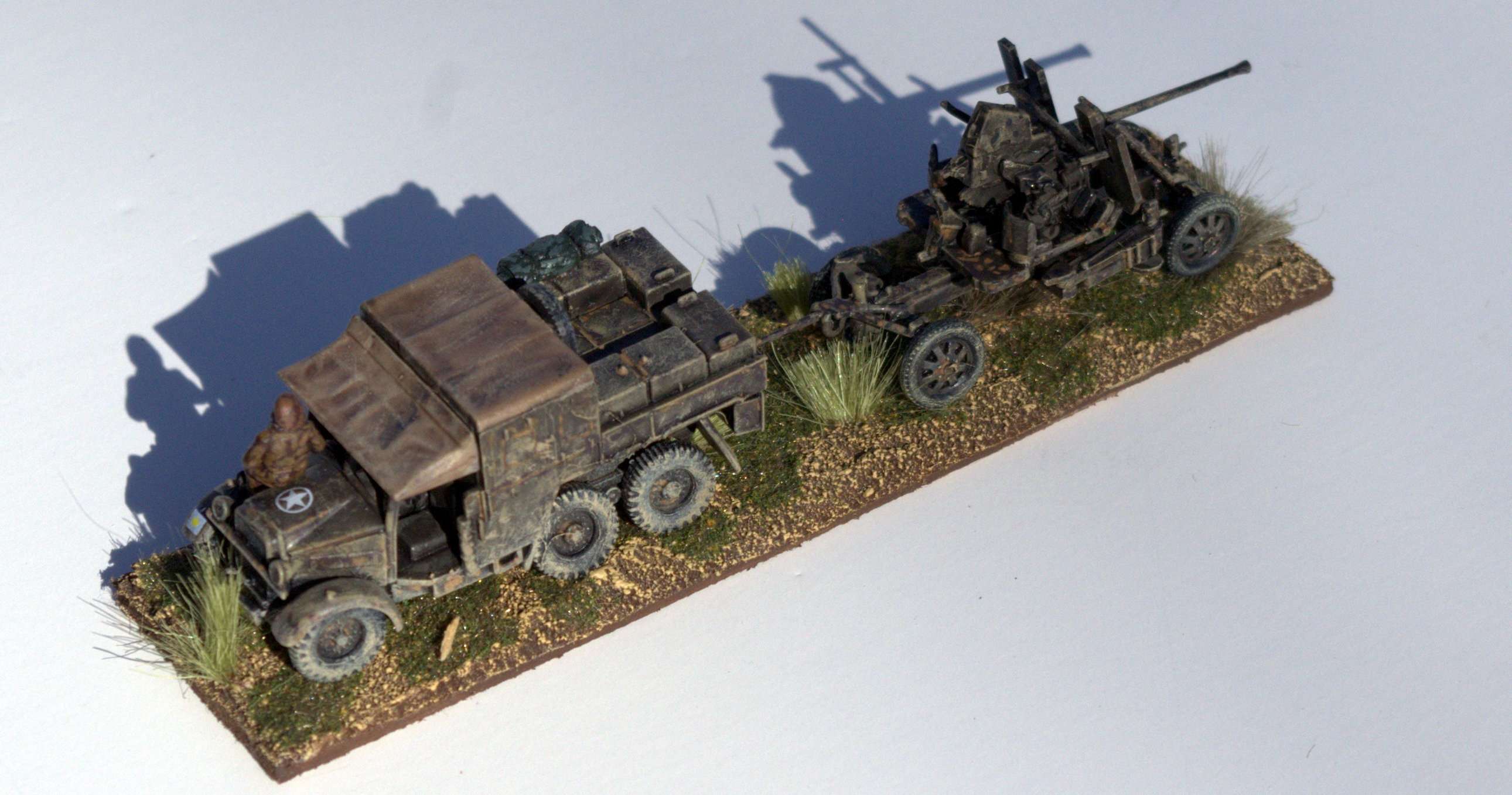 The Allied air recognition star and the 3rd Canadian Div markings are from Dom's Decals. They are intended for 15mm models but they work ok for 20mm, methinks. The piece of stowage on the back of the vehicle is from a RAFM pack of 20mm boxes and stowage items I snagged at Hot Lead last month.

The two crew figures are from AB Figures - first rate stuff. I had them in my bits box and wanted to give the model an extra touch. As someone on the Guild kindly commented, the model has the look of troops waiting for the order for a convoy to resume. The faces in this photo are too dark for my liking. I am working on a three colour face painting process using a lot of glazing, and I hadn't managed the lightest shade yet when this was taken. 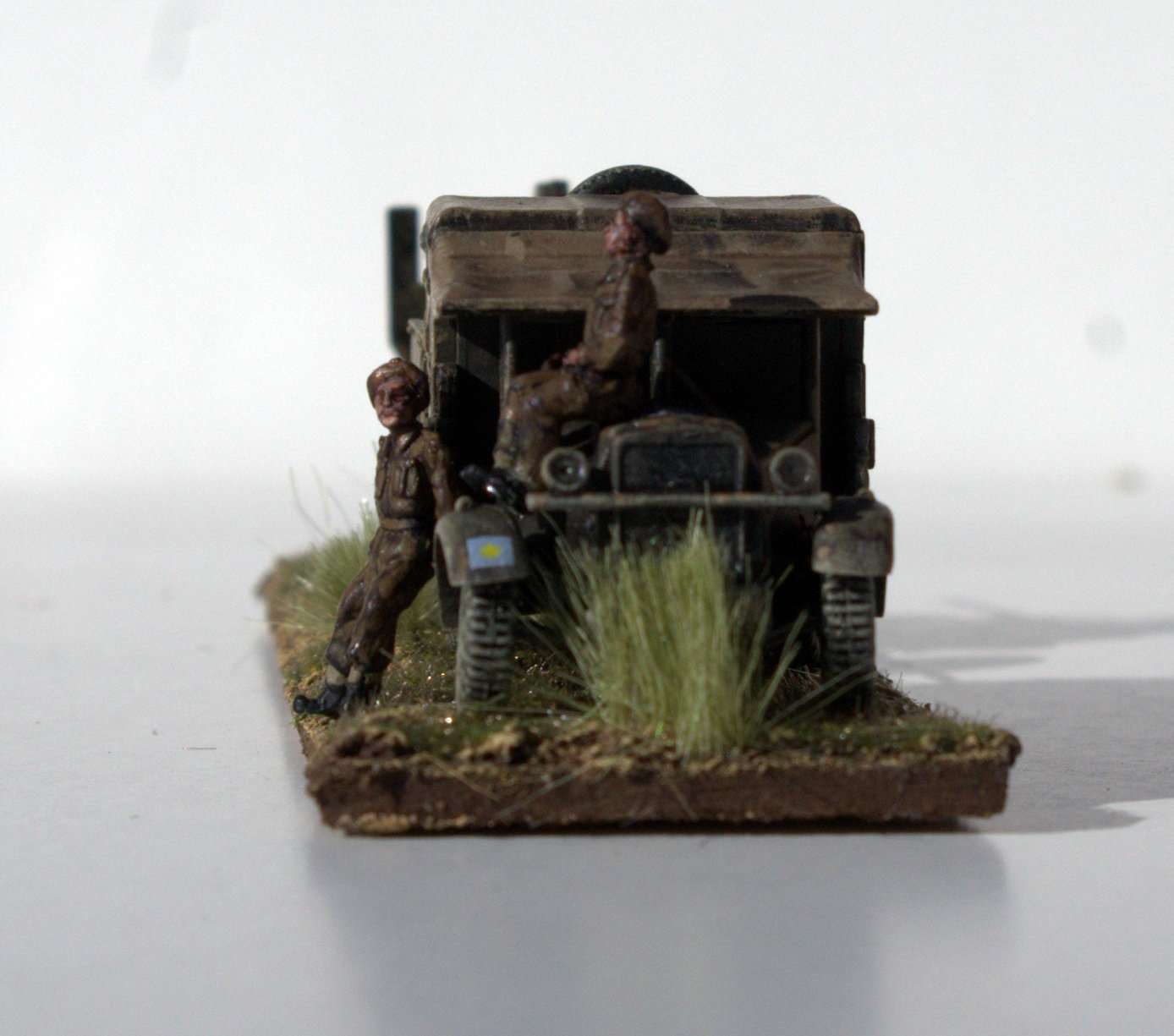 The face on the standing guy, seen on the right, is a little better here, after the last coat. Could use some eyes, methinks. 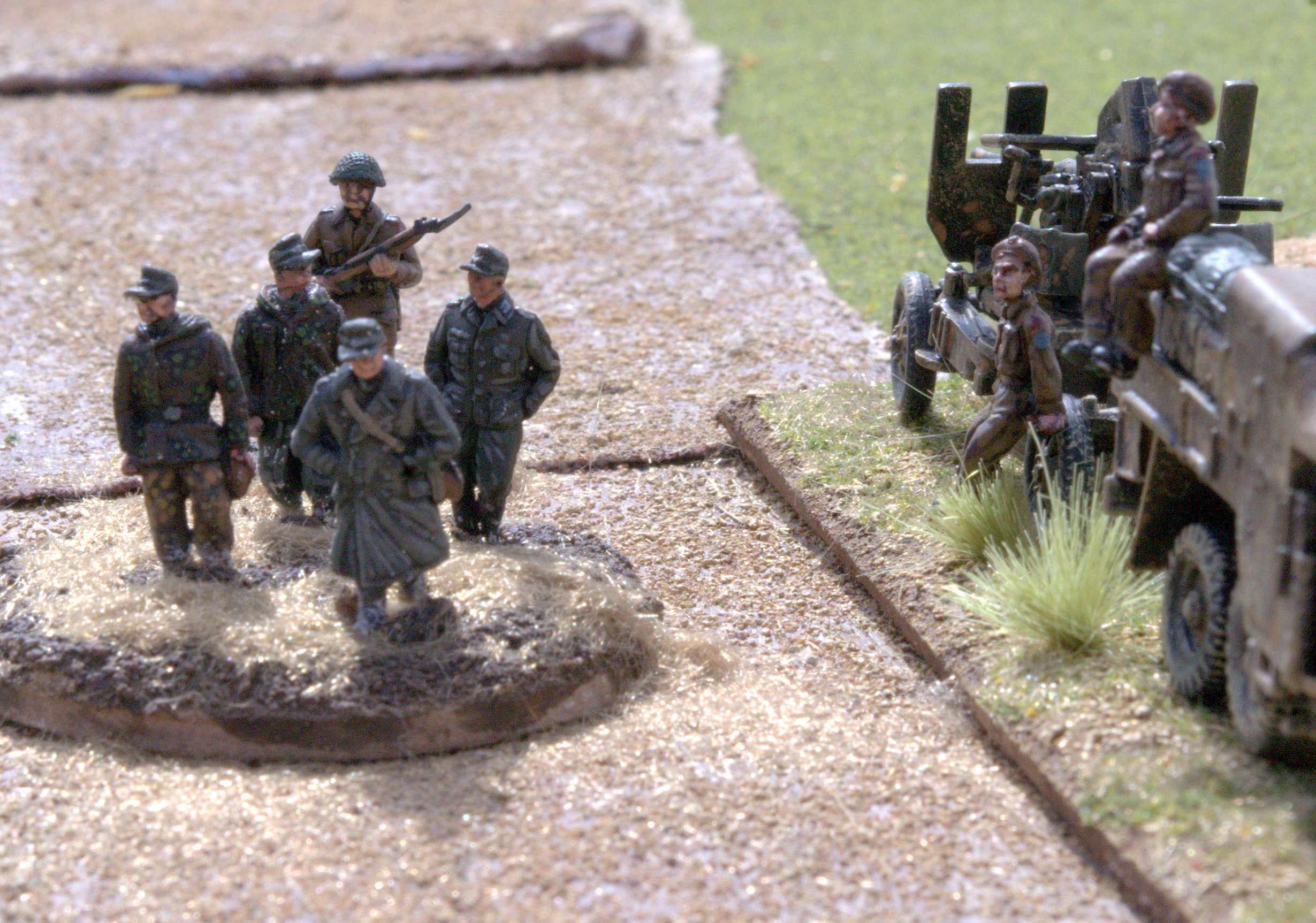 I know I haven't got a chance in heck of making the top four of forty plus entries in the Guild Build and I'm fine with that. It's very stiff competition and I find this sort of thing useful as a way to challenge my painting game and see if I can find ways of improving, and that's what it's all about, really.