Battle in Progress - Skirmish in the Hedgerows 2

In thelast report, Cpl. Tate's section had made come under fire from a German sniper, and was pinned outside the walled farm. Seeing the Tommies stacking up outside the wall, and hearing the noise of the Churchill tank approaching, Hans and Frans, the two sentries, decide to leg it for the German lines and give warning of an attack. 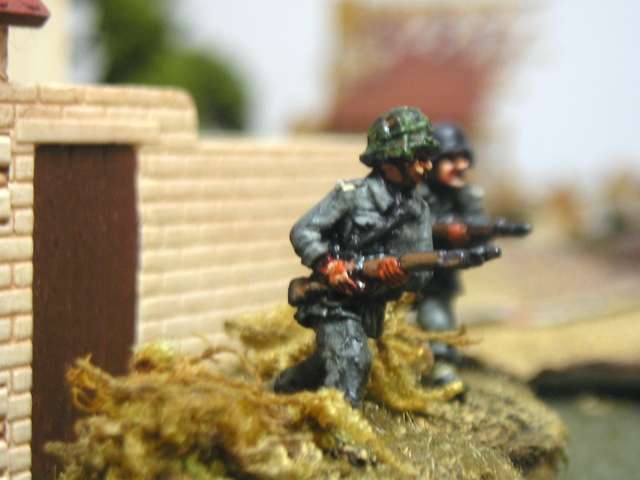 "Well, Frans, I always thought that when Der Fuhrer said "Not one step backwards, he wasn't speaking literally - it was more of a metaphor."


A leadership card (Tactical Initiative) card allows Cpl. to wave his Bren team forward on the reasoning that it's just one sniper and he can't target everyone at once. The Bren team breaks into the courtyard but can't see the sniper. 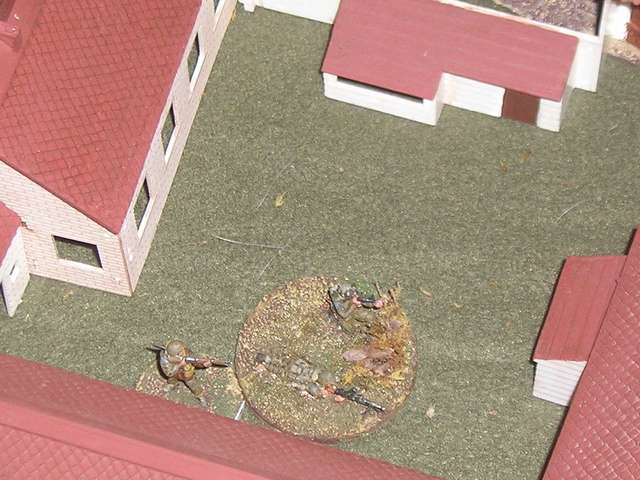 Hearing the sniper fire, and seeing their sentries fleeing towards them, German blind begins probing towards the walled farm on the German blinds card. In this photo there are some small red dice around and near the walled farm. These represent possible locations of the sniper. Under the TWAT mechanics, a dice is eliminated when the sniper fires and gets an adverse result, or when enemy figures occupy that position, thus simulating the enemy force gradually working out the sniper's location through a process of elimination. 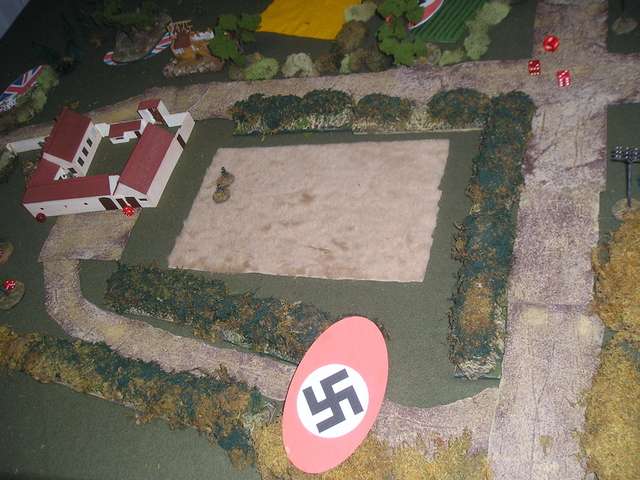 The sergeant commanding the Churchill tank is nervous about a possible antitank gun sited up that long road, but he's just as nervous and immobolising his tank trying to cut through the hedges. He cautiously moves onto the road to begin flanking the walled farm, keeping pace with the infantry moving forward on the far side of the road. 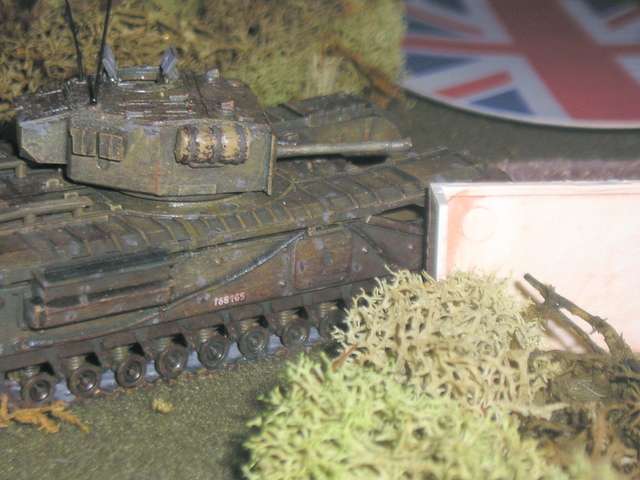 German blinds move forward cautiously on the right flank to take up firing positions to meet the Tommies' attack that seems to be developing. 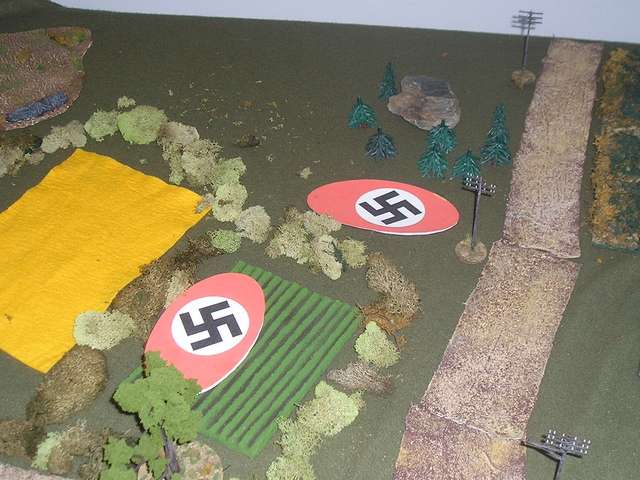 Leutnant Muller peered through his Zeiss field glasses towards the walled farm where the commotion seemed to be developing. He focused and his throat went dry as he mades out the shape of a Britisher tank creeping around the farm. "Verdamnt!"

Hmm, that curling road needs a bit of work. The roads are strips of old tea towel, coated on one side with mono caulking, textured with model railroad ballast and painted. I believe the tip came from Fonzie's Scratchbuilding website. 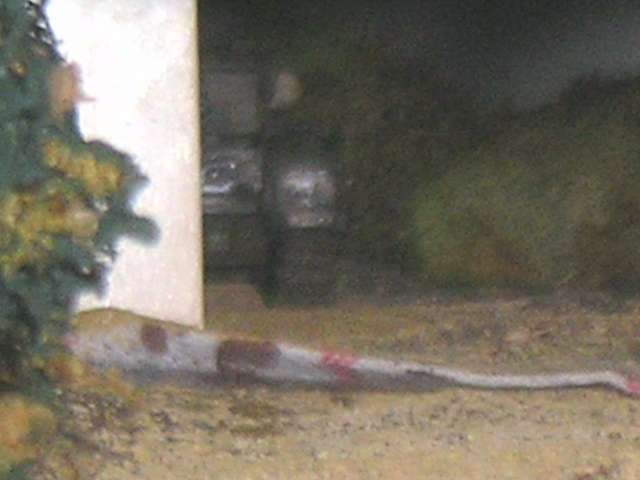 Lt. Muller summons his last reserve, a three man panzer hunting team equipped with rifles and a Panzerschreck, and sends them forward to take up ambush positions in case his handful of antitank mines fails to stop the Tommy tank. 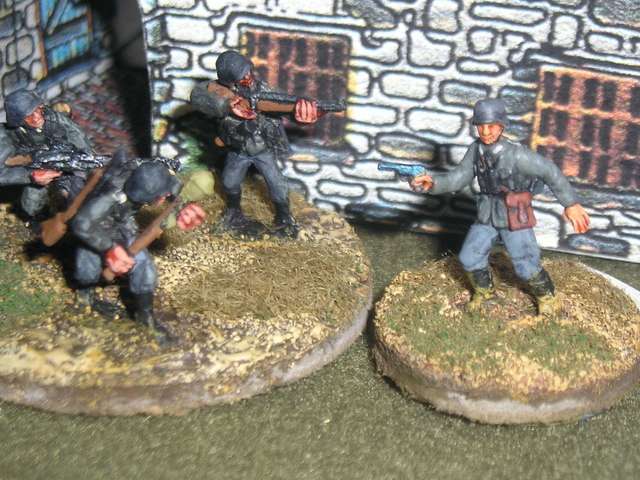 "I know it's a tank but you're bloody tank hunters. Get schtalking!" Lt. Muller briefs his panzerknacker team. The officer is an old Esci plastic figure, the other chaps are metal of unknown origin, carrying a panzerfaust and not the specified panzerschrek bazooka-type weapon. I need some German figs carrying a Pschreck.

Gefreiter Halle peered through the hedge. The Tommies were in the farm, that much was sure, and his orders were to delay them as long as he could. He waved up his MG 42 team. "Give em a burst." Within ten seconds the two landsers with the LMG set up at the end of the hedgerow and began spraying the farm's gate. 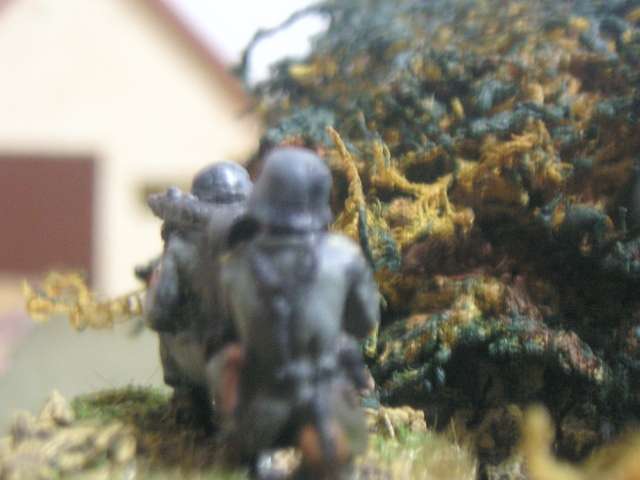 The results are successful - a member of the British first section's Bren team is killed. However, the British aren't pinned and the cards allow Cpl to order his Bren team to return fire. They put two wounds on the German LMG team. uses the next two leadership cards to order his rifle team to use two of their three initiative dice out of the farm and towards the hedge. They use their third and last dice to throw grenades, which don't cause casualties but help persuade Halle pulls his section all back behind the hedge. 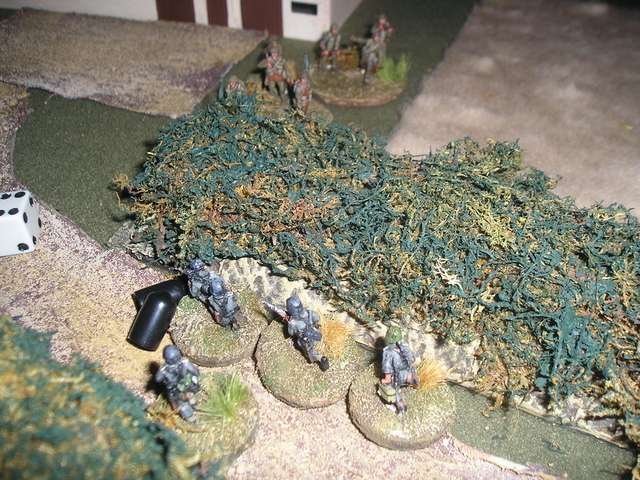 Hans and Frans the sentries breathlessly report to Gefreiter Halle and rejoin their section. 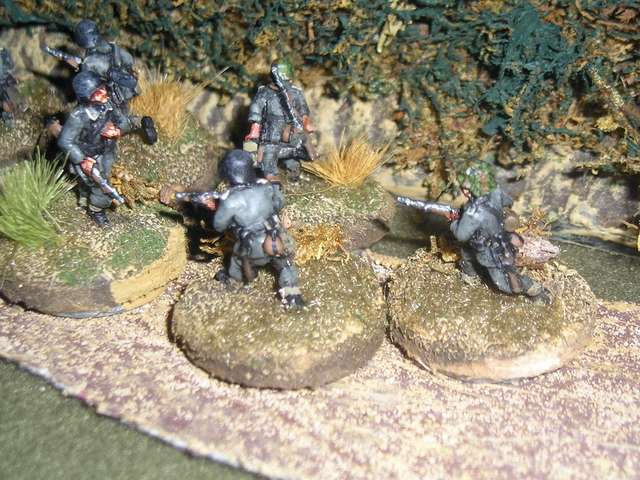 "About bloody time you two showed up!"
Posted by Mad Padre at 4:13 AM