First Look At War of the Ring by Ares Games

It’s been all Diplomacy all the time here, lately, but now for something different.

Years ago I had a copy of an old SPI game called The War of the Ring, a huge multi-map affair with two game systems in one:  a hex and counter military game, featuring the armies of Middle Earth, and a character game using cards which depicted the progress of the Fellowship of the Ring.   It was a terrific game that I bitterly regret selling in a period of hard times.

Recently my memory of that game was stirred when I was reading Matthew Sullivan’s excellent blog, Oldenhammer in Toronto.   Last month Matthew described a project where he was painting old school LOTR miniatures for Ares Games’ War of the Ring.   Matthew wrote that “I’ve never played a game that better captures the flavour of Tolkien’s work.  Perhaps the best part of it is that while staying true to the essentials of Tolkien, the game gives you the freedom to re-shape the events in his trilogy”.   This praise got me thinking of the old SPI game and wondering if perhaps there was a way to replace it after all.   So far, I haven’t been disappointed.

Last week I found this in my local games store.  It’s a heavy beast, somewhere around 2-3 pounds in a big box, and not cheap, though any imported game bought new these days isn’t that cheap here in the Mexico of the north. 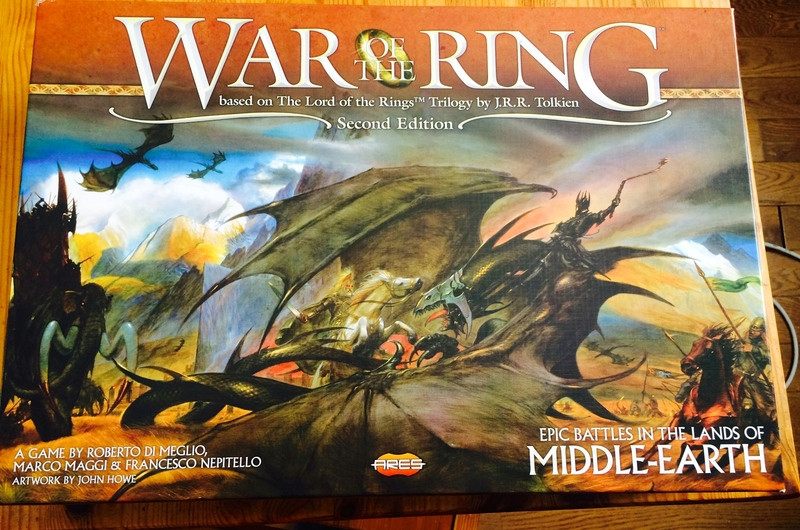 The first things one unboxes are these two beautiful illustrated maps.   They are so big that I had to stand on a chair in my dining room to get them both into the shot. 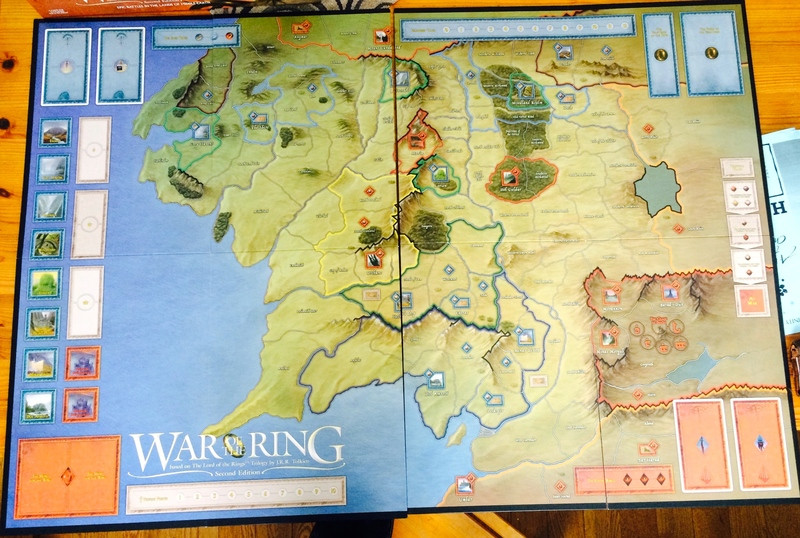 I see crossover possibilities for using these maps in my Dux Rohirrim project.   Here the diamonds are Settlements, which can be used as possible locations for bringing reinforcements into the battle.  Small rectangles are Cities, which confer a slight defensive bonus and count as victory points in the military game.  The large squares are Citadels, which can shelter defending armies in sieges, and which count the most for victory points in the military game. 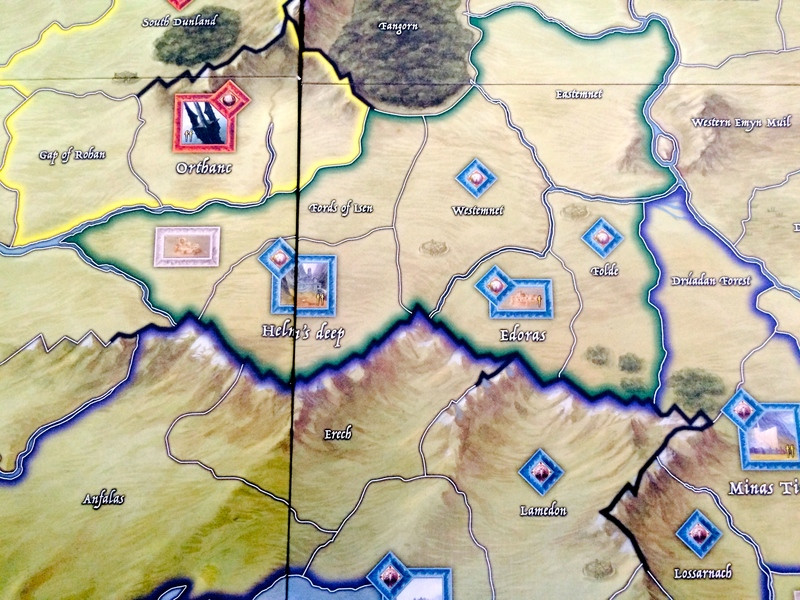 Some of the character cards, beautifully illustrated by fellow Canadian John Howe.  Characters include the Fellowship of the Ring and three Minions:  Saruman, the King of the Nazgul, and the Mouth of Sauron.  The Fellowship characters can be used to take the Ring to Mount Doom (as with the old SPI game, there is a sub-system built into this game for the Fellowship and Ringbearers) or characters can be detached to help in the military game. 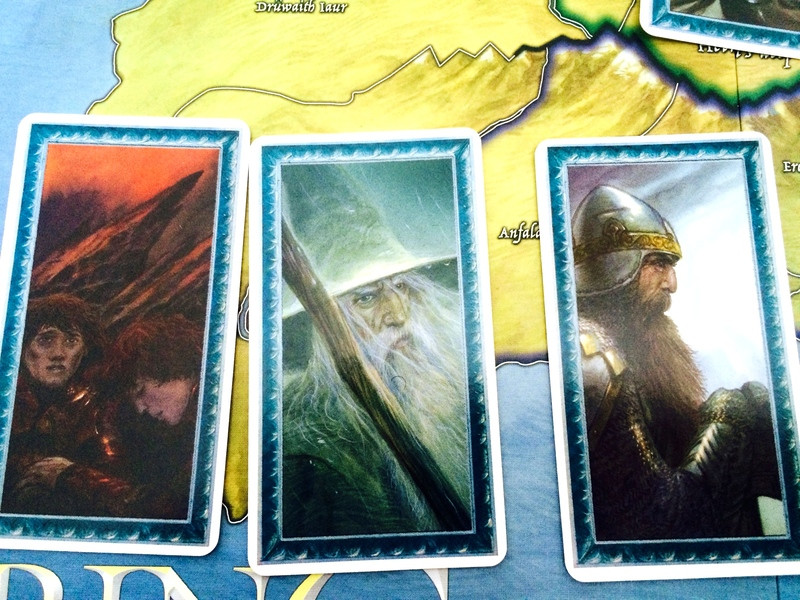 The beating  heart of the game are these Event cards, divided into two types for both Good and Evil sides:  Army cards on the left, which confer benefits in recruiting and leading troops, and Character cards, which assist in the quest of the Fellowship and/or the Hunt for the Ring.  Both sides can play these cards for these purposes, or, they can use the bottom half of each card (the bit below the line) in army combats during the military game.  Once cards are played, they are gone for the rest of the game, so using a highly useful card in the Ring game to confer a temporary bonus in the Military game can be an agonizing decision. 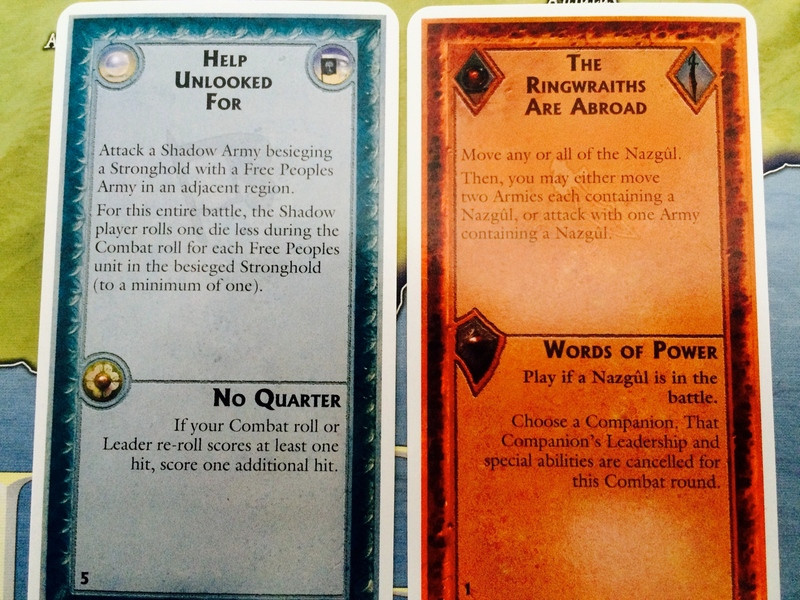 The kinds of cards you can draw and play, or the actions you can take with characters and armies, are determined by the types of action dice you roll.   The Evil player gets more dice than the Good player, but the Evil player can find some of dice diverted, either intentionally or required if he rolls the eye icon, to the Hunt box, reflecting Sauron’s obsession with finding the Ring.   The more eyeball dice are in the Hiunt box, the harder it is to move the Fellowship  without detection and even damage, which can be taken either as Fellowship members dying, or the Ringbearer taking what are called Corruption Points, reflecting the Ring’s malign influence on the Ringbearer.  The Evil player can win the game either by accruing military victory points, or by maxing out the Corruption of the Ringbearer.  The Good player can win by getting the Ring to Mount Doom, and also has what seems to be a faint chance of a military victory. 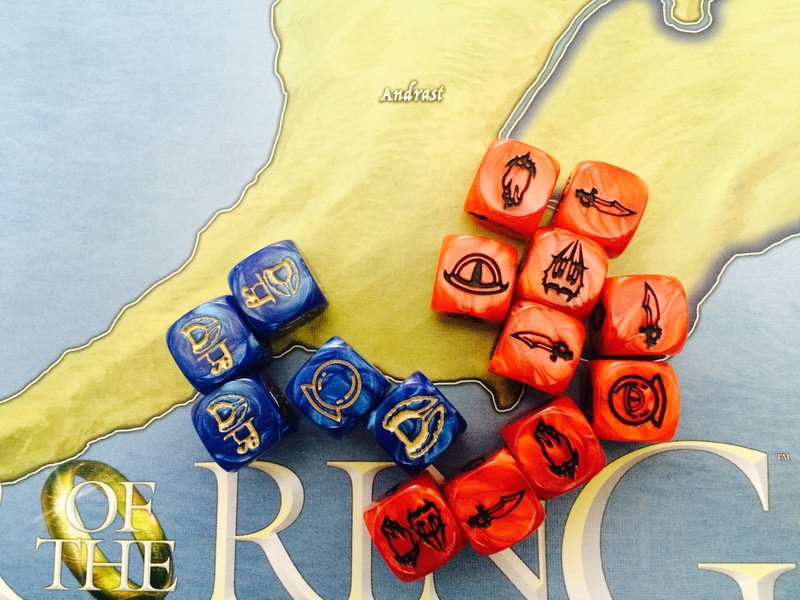 The game also includes a generous amount of army tokens, in the form of these soft plastic models, which appear to be somewhere between 15mm to 20mm in scale.  Each nation in the game (Elves, Dwarves, the Northern Peoples, Gondor and Rohan for the Good player, Isengard, Sauron and the Southrons for the Bad player) has the same troop types:  Regulars, represented by the smaller tokens (the blue foot guys here), Elites, represented by the larger figures (the blue Rohan horse figure here) and Leaders, who are shown in grey plastic and which confer the benefit of re-rolls of unsuccessful combat dice (ordinary d6) in army battles.  I suppose one could either paint all of these figures (a council of madness) or replace them with larger figures from the GW or similar ranges of LOTR figures. 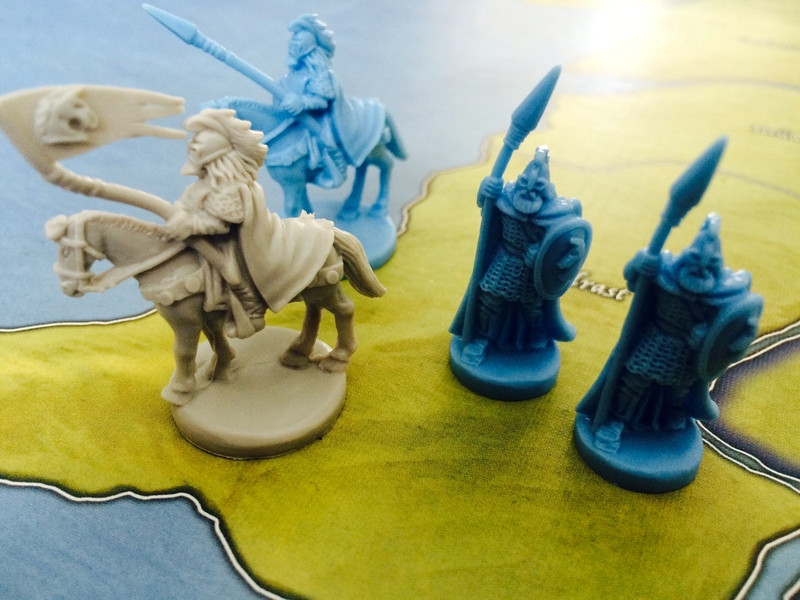 The Evil army tokens are cast in this rather distressing reddish-orange.  I love the Oliphants for the Southron player.  The evil player gets Nazgul as his Leaders. 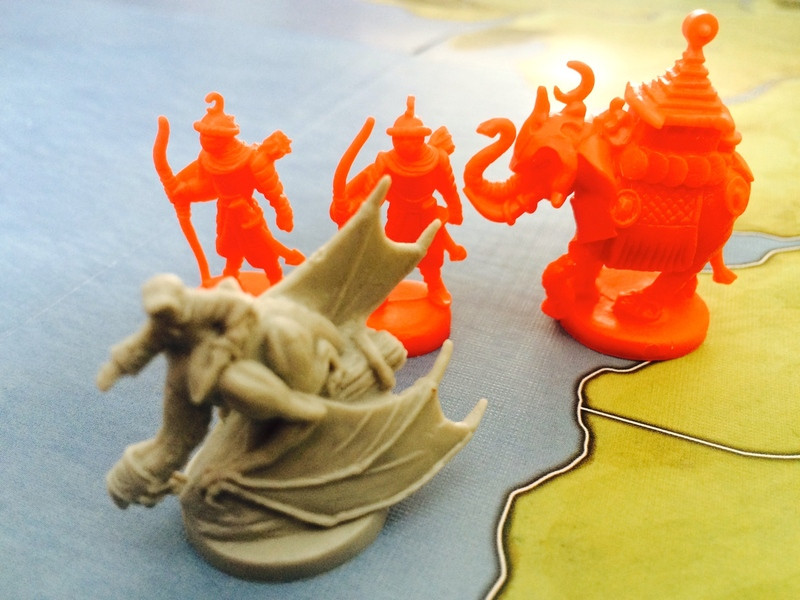 The only difference between Regular and Elite armies is that Elites can take two hits before being removed, whereas Regulars are removed after taking one hit.   The Evil player can bring his casualties back into the game as Reinforcements whereas when the Good player loses an army unit or leader, they are gone forever.   Army combat is fairly basic, with a dice rolled per side with hits on a 5 or 6, unless your target is in a citadel or city, in which case you only hit on a 6.  Armies can be as large as ten units in a map region, but you only get to roll a maximum of 5 dice per turn.    Army combat gets interesting depending on the cards players can dedicate to to fight, and depending on which Characters/Minions are present.   For example, the King of the Nazgul is a pretty bad dude, but his abilities can be largely negated if Gandalf the White is present (Gandalf the White is basically a power u of Gandalf the Grey, just as Aragorn of Minas Tirith is a power up of Strider).

I have not yet played the game through, as it seems to be a long game, at least 3-4 hours.  My friend Bruce and I gave it a go on Monday, and liked it a lot.   We found that the Evil player can quickly get a juggernaut going, but has difficulty getting his armies rolling quickly if he wants to check the Fellowship.   The Good player has some hard choices to make in the military game, and faces some agonizing choices in sacrificing his irreplaceable units.   However, the Good player can afford to trade victory points for time, so he can sacrifice one or two Nations without losing the game on VPs if the Fellowship is successful   The Good has to use his or her armies cleverly to buy time while still leaving enough action dice each turn to move the Fellowship.

Wr of the Ring is a two player game, but 3-4 can play by dividing the Good/Evil nations amongst themselves.

There are a series of very helpful videos here which got me into the game fairly quickly, but I found the rules to be fairly simple and well written.  Tolkien fans may be disappointed that the game does not include some iconic figures, such as the Balrog, Galadriel, Elrond, or  Treebeard and the Ents.  However, Ares games offers two expansions: Lords of Middle Earth  and Warriors of Middle Earth.

War of the Ring gets the Mad Padre blessing and a bonus genuflection.