Zombies On The Road

Well, not on the Trans-Canada Highway, fortunately. We covered over 600 kilometres yesterday, starting in Thunder Bay and ending up in Sault Ste. Marie, with no zombies. We did see many breathtaking views of Lake Superior as we traversed its northern shore. 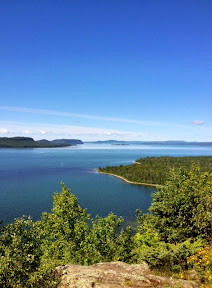 We had a few hours rest in our hotel last night, after an excellent Italian meal washed down with some so so vino collapso, leaving me in the mood to try this recently acquired boardgame from Victory Point Games, the second edition of Herman Luttmann's Dawn of the Zeds: The Battle for Farmingdale. 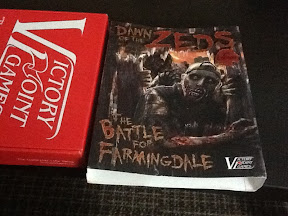 Don't let the curious pizza box and paper slip cover fool you, what lays inside is a very clever and beautifully produced game. The components are clever and whimsically designed; for example, the tokens for the zombie hordes each have little bite marks taken out of the top corner. The map is double sided, allowing for a basic game and an advanced game with more tracks ad charts. 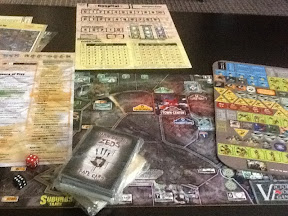 Dawn of the Zeds is part of VPG's solitaire series, but it could be played cooperatively with several human players. The Zeds are controlled by cards, with hordes trying to move up five tracks to the town centre, which would immediately end the game in a human defeat. The humans have very slender resources, a few bands of armed civilians led by individual heroes (including Pickles, the dog!) and have to hold on until the National Guard arrives. Advanced rules include medical and scientific research, refugees, a mad scientist, marauders and super Zeds.

I tried a few turns of the basic game last night, and found the mechanics fairly easy. We have a few easy days now while we wait for the moving truck, so I'll try and get a complete game in and will report back on whether I could save Farmingdale.


Posted using BlogPress from my iPad