(With apologies to Robert Frost)

Stone fences are a useful bit of tabletop terrain. They are commonplace in many rural and agricultural areas (NW Europe, eastern US)and they make good cover for infantry. I recently finished these terrain projects, stone fences by two different manufacturers.

First is a resin stone fence by UK manufacturer Hovels, ordered through a US distributor, Michigan Toy Soldier. I had a good experience with their customer service, and would recommend them to others had I not discovered, while googling their link, that the owner of MTS was recently sent to jail for defrauding the Amex card of Peter Jackson, LOTR film director and toy soldier fan. No Mad Padre blessing for Michigan Toy Soldier!

I bought four straight sections (about 8" each) and four corner sections for ACW gaming, and they look like this, though I can't imagine why a farmer would want a totally enclosed field! Maybe a gate or something is in order. 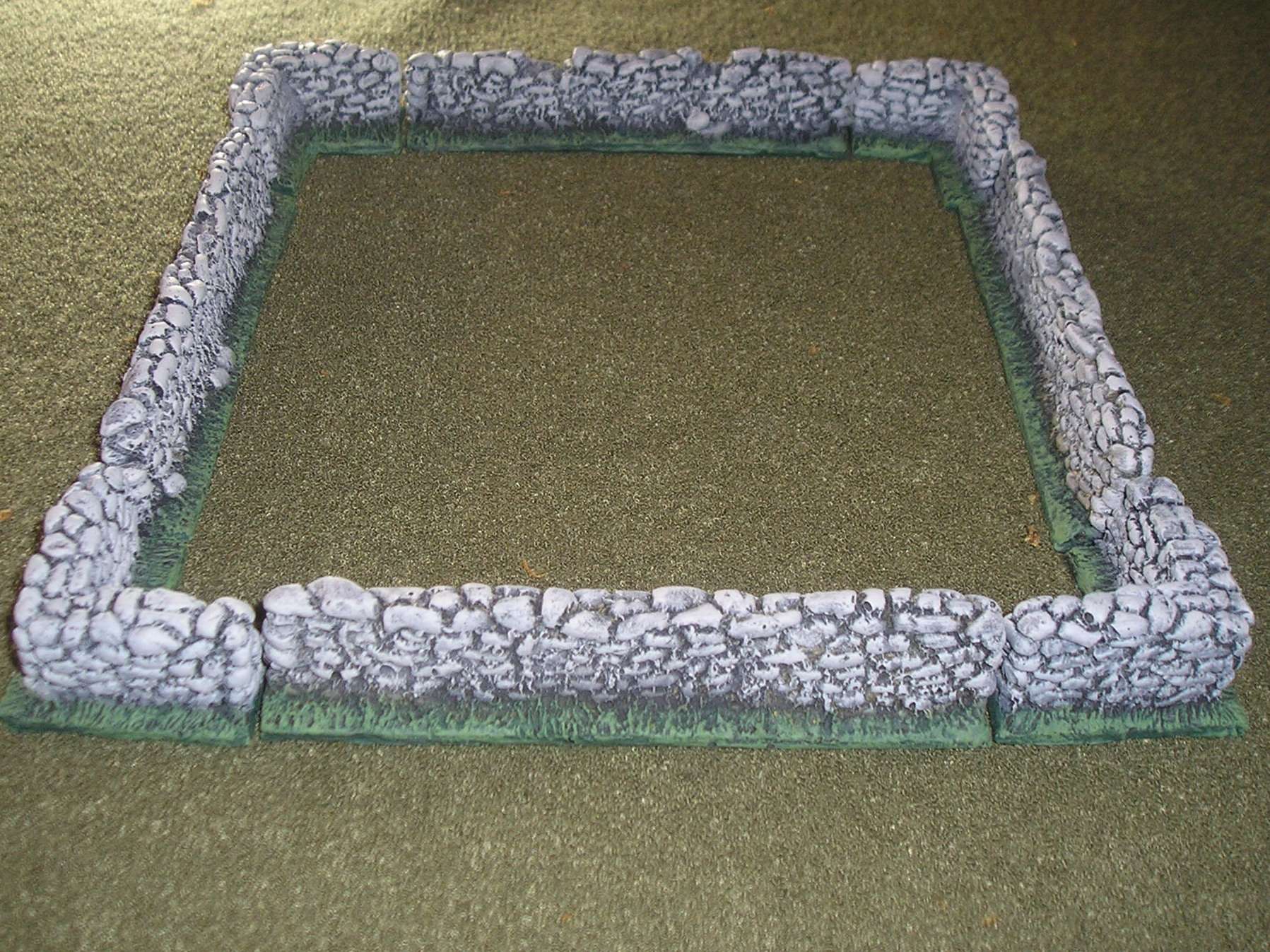 Painted them gray, failure of imagination. At first I did some in brown with drybrushed ochre and yellows, since not all rocks are created gray, but it didn't look right.

To show scale, here's the fance with some old RAFM 25mm figures behind them. 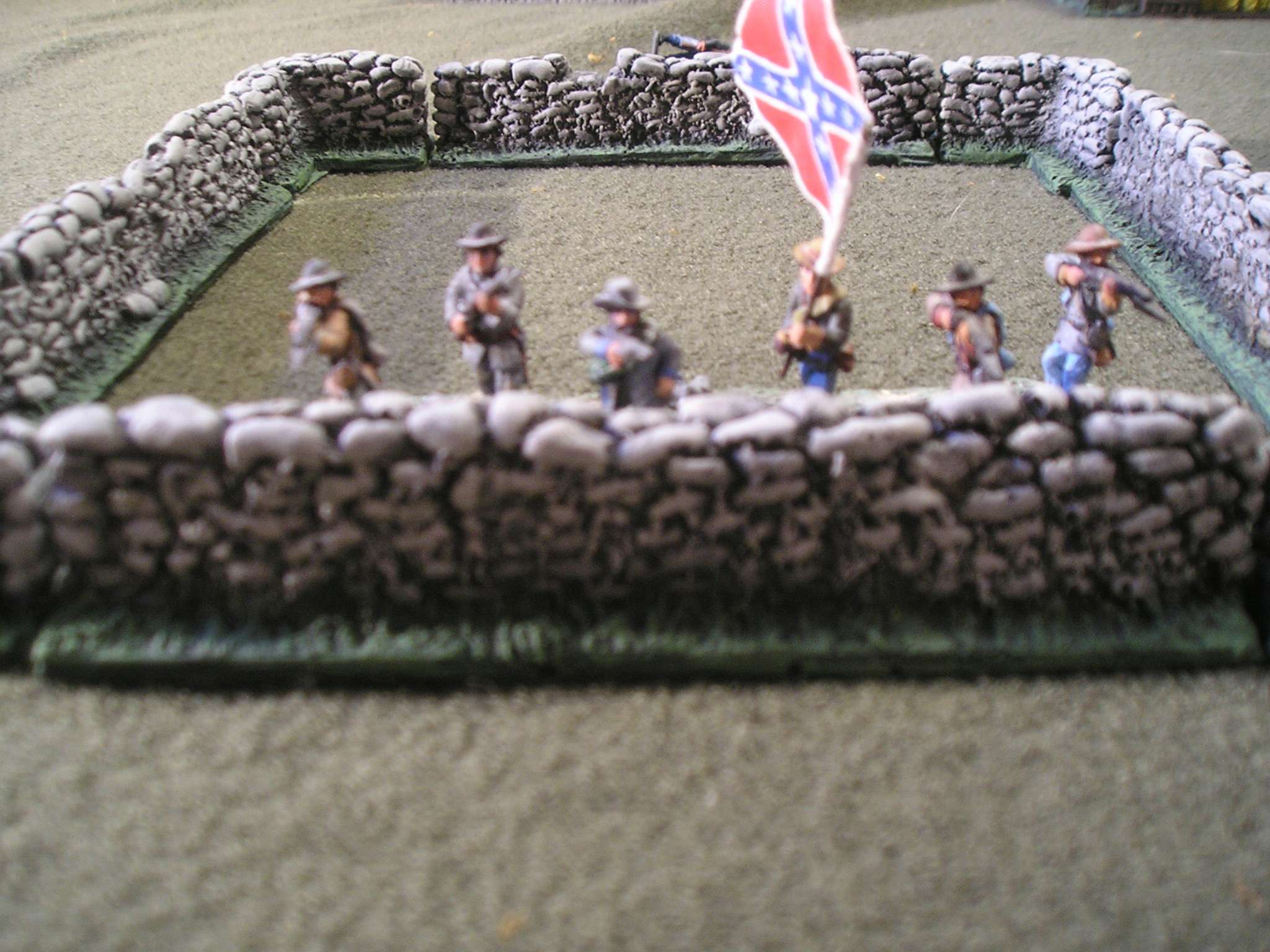 Also, last year while I was visiting The Dragoon, a great toy soldier store near Barrie, Ontario, I picked up a set of Italieri 1/72nd scale plastic stone walls, which gives you a lot of modular pieces, both intact and ruined. As with other Italieri terrain kits, the plastic is sturdy and the detail is pretty good. I opted to make two sets, one an intact fence for a paddock or gate, which I could drop on the table, and the other a semi-ruined fence, for which I created a permanent base with a piece of MDF board.

For some reason, the next three pictures are huge. Sorry bout that. 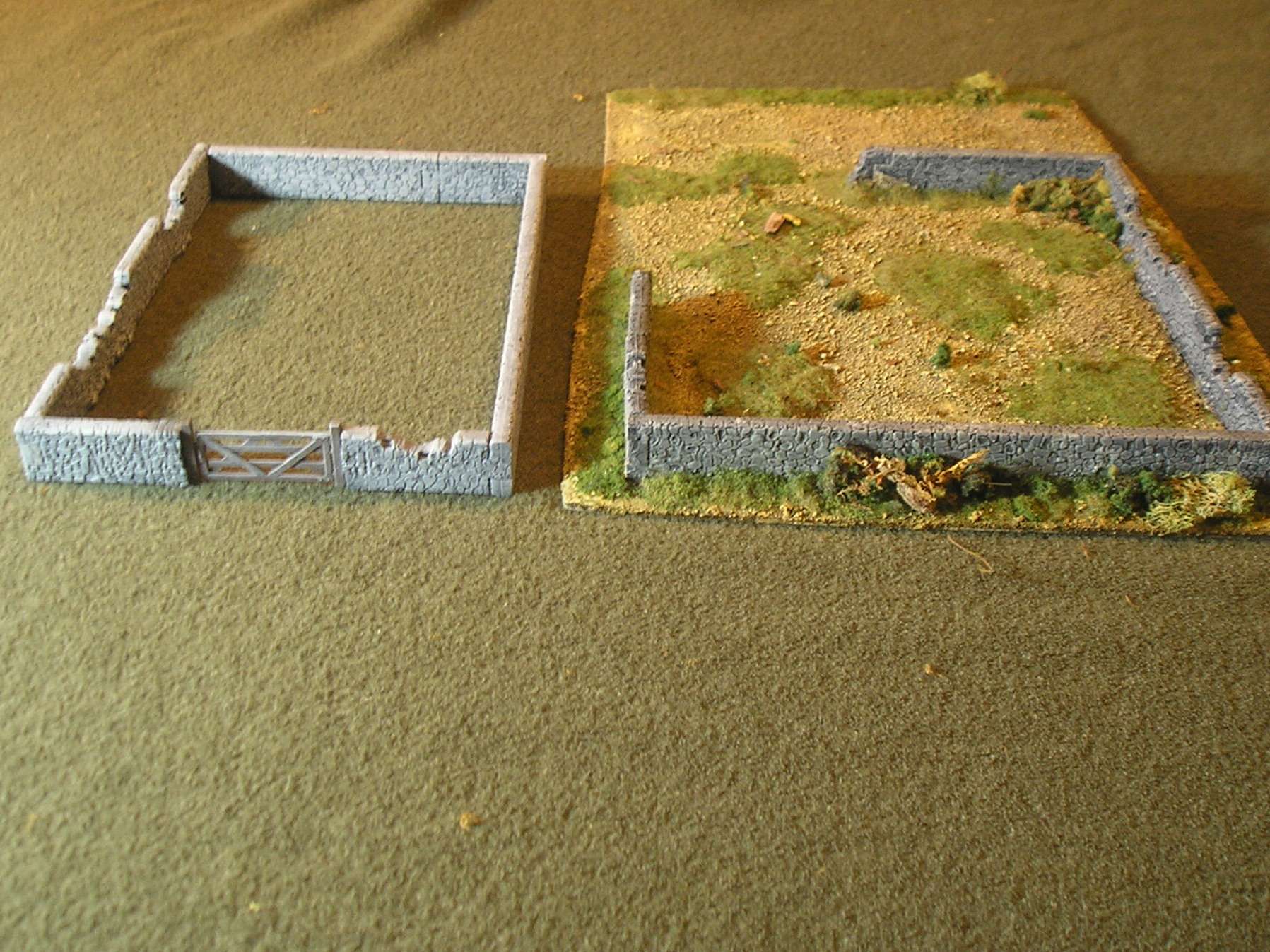 To give you a sense of scale, here's the finished terrain piece with some 20mm Jerries. 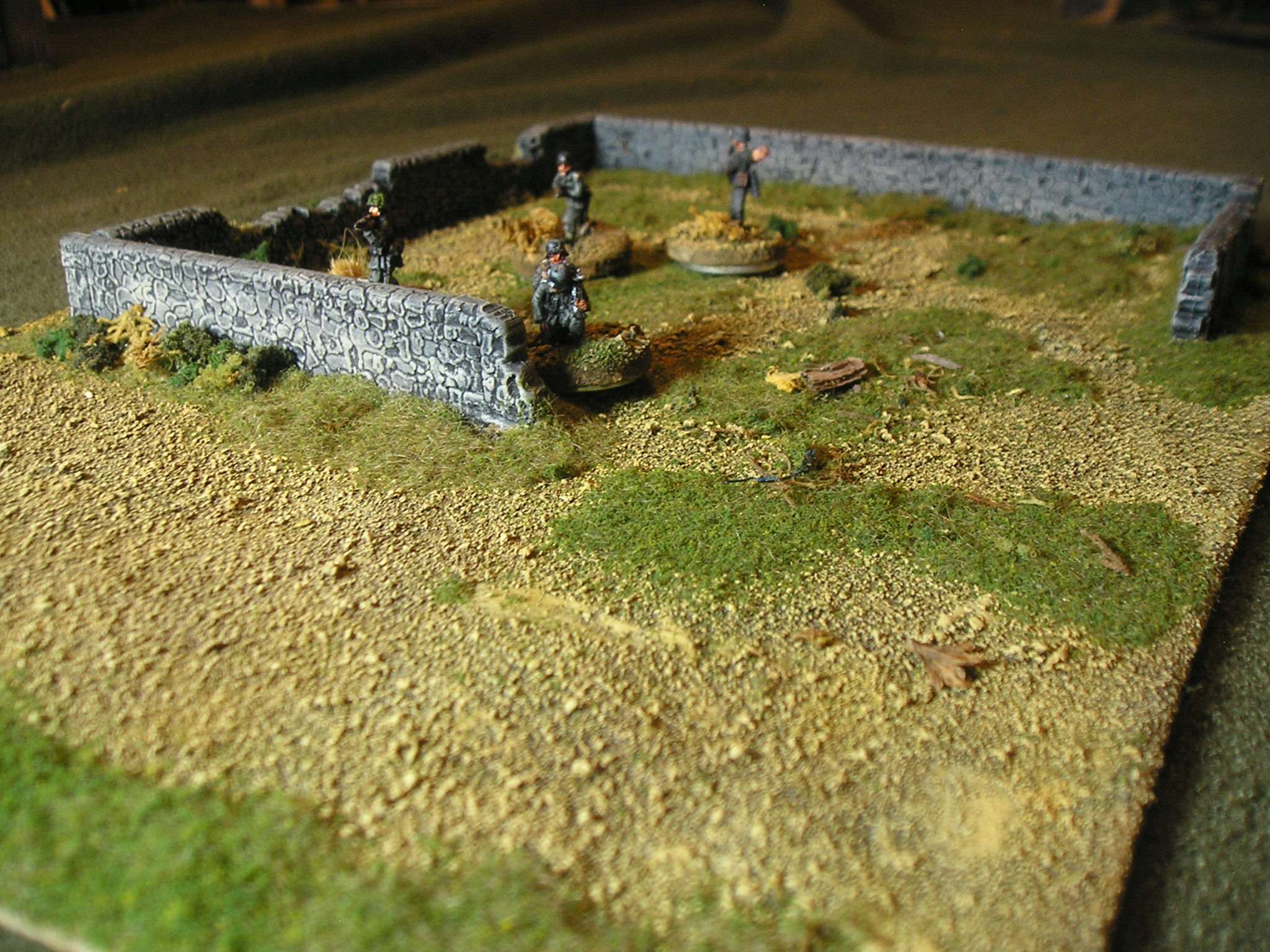 And the two pieces with a very tasty Britannia miniatures PzKwIV which is primed and waiting its turn in the paint shop. 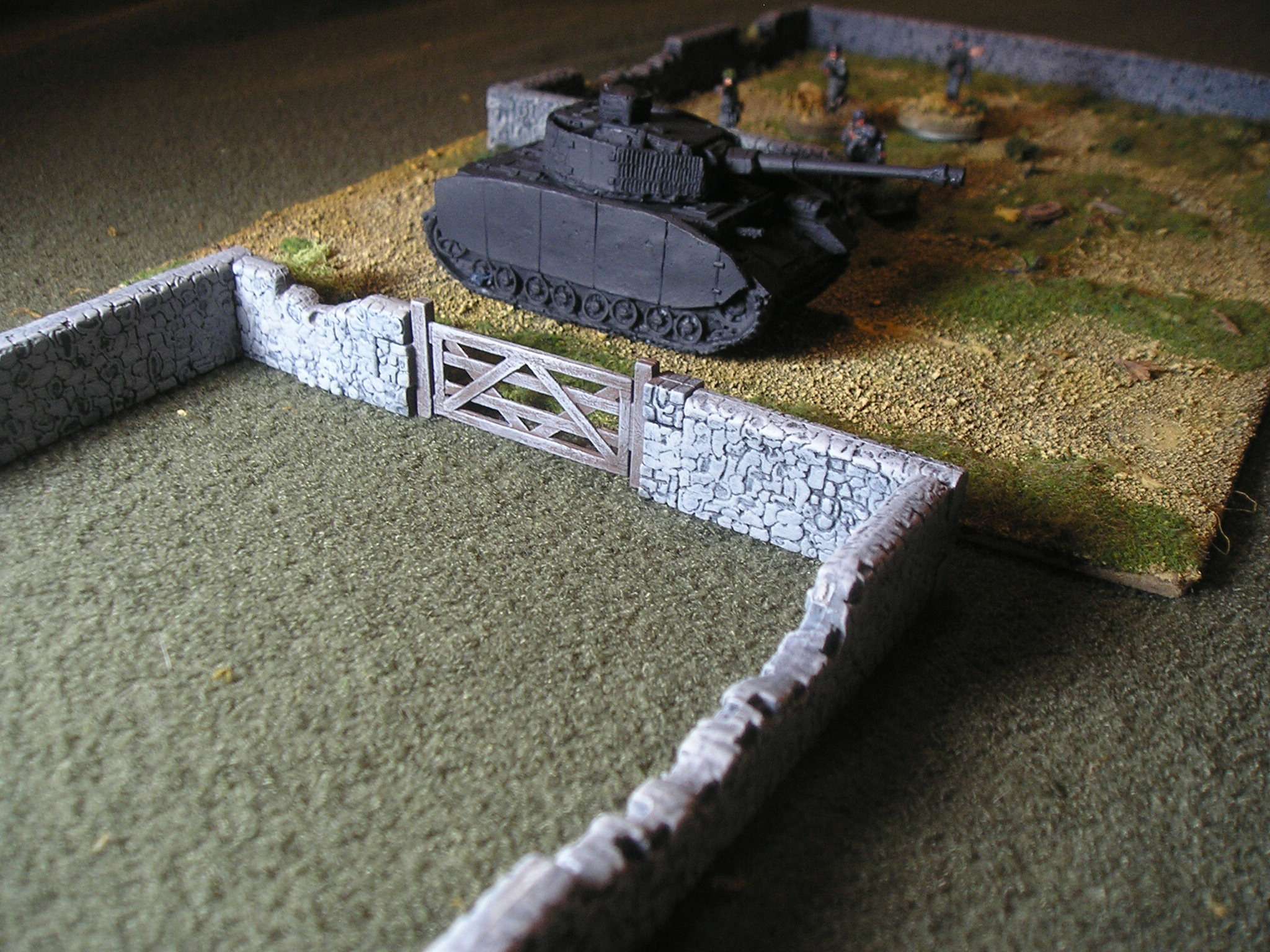 I'm hoping to get these terrain models into a battle and an AAR here soon.
Posted by Mad Padre at 7:47 PM