What I’m Reading: The Soldier’s General: Bert Hoffmeister at War. 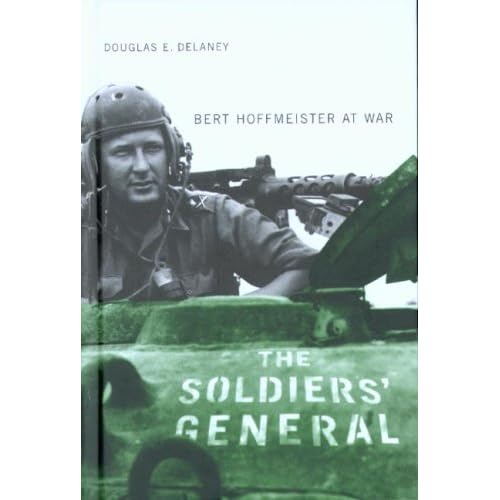 Among the papers I inherited from my dad is his class yearbook, Snowy Owl, from the Canadian Army Staff College (1955 ). Towards the end is a profile on the class of 1942, whose candidates included Bert Hoffmeister, then a Major and company commander with the Seaforth Highlanders of Canada. Hoffmeister’s brief reminiscence of the course is worth quoting in full.

"The expression “Death Takes a Holiday” has seldom been used more appropriately than on the occasion when students of the Fourth CJWSC were called on to demonstrate their skill on combination motor bikes to the satisfaction of the G1. With hardly an introduction to these gas demons, hearts quailed over the prospect of piloting these machines through Kingston, stopping, then facing up to the return journey. Had the good citizens of Kingston received any inkling of the risk to which they were being exposed that day, the streets would have been as empty as those of Cassino during heavy shelling. This unforgettable experience miraculously ended well and was indeed a conditioner for later events under fire, where in my opinion the odds were much more favourable.”

Motorcycle adventures aside, the time Hoffmeister spent at Staff College is an important chapter the story Delaney tells about how an inexperienced militia officer became one of the most successful of a now mostly forgotten group, Canada’s World War Two generals, and the commander of a storied outfit, the Fifth Canadian Armoured Division (5CAD), “the Mighty Maroon Machine”. An infantry officer and a faculty member at Royal Military College, Delaney’s focus is that of the military professional, showing how Hoffmeister learned the tradecraft of command. Non-military readers may find this book to be dry and technical, but as Jack Granatstein notes in his introduction, there’s a dearth of scholarship on the men who commanded Canadian troops in the World Wars, and this book is fine account of an important Canadian soldier.

Bert Hoffmeister might easily be offered as an example of an enduring national stereoptype, the amateur colonial soldier who took to war and who succeeded where bumbling British professionals had failed. Hoffmeister's fellow British Columbian, Sir Arthur Currie, comes to mind in this regard. Nothing could be further from the story that Delaney tells. Bert Hoffmeister was an amateur soldier before the war. An up and coming lumber executive in Vancouver, BC, he was an officer with the Seaforth Highlanders, a militia infantry regiment. The militia were willing but poorly trained soldiers in the interward period. What training they did with the regular army, the Permanent Force, was deficient. Hoffmeister recalled that the regular officers he met where “sad”, “lethargic”, “overweight”. “drank too much” and were mostly “useless”, and as a result, he admitted, “I knew damn all about tactics” (p. 18).

Mobilized in 1939 at the declaration of war, Hoffmeister and the Seaforths went to England as part of the First Canadian Division. They were well-intentioned, but their training never went much beyond basic soldier skills. Through 1940 Hoffmeister worked hard as a conscientious company commander, but he was acutely aware that he lacked any real knowledge of how to make decisions on the battlefield. By January 1941 he was suffering symptoms of a nervous breakdown, including partial paralysis. As Hoffmeister remembered, his breakdown was “brought on by the anxiety of having responsibility for a hundred men, [being] responsible for their lives, taking them into battle, and not having the necessary training to ensure that I would do a satisfactory job” (p. 30). In an army that still today views mental crises as signs of weakness, the story of Hoffmeister’s breakdown and his subsequent recovery is an important one to remember. It reminds us that fear and stress can occur even in the best soldiers, and can be countered in many ways that leave the soldier and the unit more, not less, effective.

Hoffmeister recovered thanks to army psychiatrists who believed he could recover by talking through the issues that led to his strain. He also recovered thanks to the influence of the British General Bernard Montgomery, then senior commander in Southeastern England, who instituted more realistic training and who aggressively weeded out non-performers and sent them back to Canada. Hoffmeister would later describe himself as a “disciple” of Montgomery. By autumn 1942 Hoffmeister had passed his staff course in Kingston and was back in England as the Seaforth’s battalion commander. It was the first of step in his rapid wartime rise. Once he regained his confidence, Hoffmeister’s people skills served him well with his troops. One of his NCO’s remembered that “He was in there all the time, every exercise or scheme, he was in there leading. He’d come around and ask people how they were doing … He was very good with the troops” (p. 42).

The main thread of Delaney’s biography is how Hoffmeister combined character and courage with increasing military knowledge and craft. The latter could be learned, the former were his gifts. As a battalion and brigade commander, he was brave enough to lead from the front, gathering tactical information first hand and inspiring subordinates with his confidence and energy. One of his officers remembers during the battle for Ortona that Hoffmeister, then commander of 1st Canadian Infantry Brigade, visited him and said “’Great show, Syd, terrific show, you are doing great’. He patted me on the back when all I wanted to say was, ‘For Christ’s sake, Bert, can’t I have a rest [?].’ There was no way I could say that to him. He was so great that way … I was so impressed with the way he inspired and put so much spirit into people. You couldn’t say no to him” (p. 103).

When he moved to divisional command of 5CAD, Hoffmeister learned that he could not manage a larger battle from the front. He also learned that he could no longer visit his wounded troops in hospital, because the experience left him feeling like a “dishrag” and he became worried that his concern for his soldiers “could affect my judgment in planning an attack” (p. 152). Hoffmeister led his division ably in the last big battles of the Italian campaign, and then led 5CAD in the Liberation of the Netherlands. While he was in Italy he served under the British Eighth Army, and found their command style to be informal, relying extensively on verbal orders. Under fellow Canadians Harry Crerar and Guy Simmonds, the atmosphere was formal, everything was written, and there was less “mutual rapport” (p. 206). In short, the Canadians were more British than the British! Hoffmeister did well in Holland, and he finished the war at home as commander of the Canadian contingent preparing to invade the Japanese home isles. After the war he returned to Vancouver and the lumber industry and died in 1999 at a vigorous ninety-two.

Doug Delaney has done us a great service by reminding us of a fine Canadian soldier. Bert Hoffmeister was an amateur who became a professional. He learned from role models such as Montgomery, cared for his soldiers, tried to preserve their lives through careful planning and simple orders, and inspired them to give their best. During the battle of Agira in Sicily in 1943, one of his Seaforths, a corporal and a radio operator named Corporal Denis Meade, won the Military Medal for manning an exposed position to keep Hoffmeister in radio contact with his subunits. As Meade said later, he took the risk because “I didn’t want to let [Hoffmeister] down” (p. 70). As Delaney notes, the ability to inspire such loyalty in his troops was the key to his success, and made “Hoffy” stand out amongst other Canadian generals.
Posted by Mad Padre at 6:32 AM